By Naijaadvance (self media writer) | 2 years ago

Investigators of the Ogun State Police Command on Wednesday 15, June killed a suspected kidnapper along Shagamu-Ijebu Ode road and saved two of their victims.

The CPRO, DSP Opeyemi Abimbola explained this in an announcement made available to newsmen in Abeokuta, Ogun State.

Abimbola explained: “The incident occurred when the Divisional Police Officer Shagamu, SP Agunbiade Okiki was on regular patrol with other police office men and spotted a Sienna vehicle with registration No. MUS86FN with some people whose suspicious look attracted the spotlight of the policemen which make them stop the said vehicle.

“instead of the driver to stop, he speeds off towards Ijebu Ode way consequent upon which the DPO Okiki commands his men to chase them.

“Upon knowing that they are being followed, the men in the vehicle began shooting at the policemen while on the move and the policemen shot back.

“They later dropped down, left the car and ran into the bush, the policemen chased them into the bush and killed one of them while others fled with gunshot wounds.

“Rescued from the abandoned vehicle is an NYSC, known as Agnes Okoroji affixed to Federal Girls’ College, Sagaamu and one Sosanwo Tawa”.

Oyeyemi explained that “the 2 victims told how they were abducted at the various area by the criminals who were taken them to the hidden area before police officers intercepted them on the road.

“Their operative vehicle was seized by policemen with the following items: one gold wristwatch, one cutlass, One Samsung Galaxy S7 phone, one black wristwatch, and One black toy gun".

The CP, Ebrimson Kenneth who praised the bravery display of his men, disputed to people of the public particularly hospitals to inform the police if anybody with gunshots injury is seen in their area.

He also ensured the people of the public that the fleeing criminals will be hunted for and apprehended within the shortest possible time. 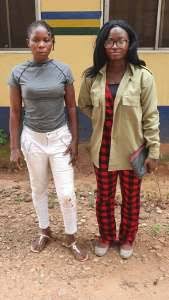