"They Are Strong", The Story Of Derico Nwamama And How Bakassi Boys Captured Him.

By AnonymousLado (self media writer) | 2 years ago

There have been quite a number of notorious and deadly Armed robbers who were terrorizing different parts of Nigeria in the 90s.

In the South West, Oyenusi was a terror, Anini held the South South to a standstill literally and the east also had their own criminal kingpin. His name? Derico Nwamama. 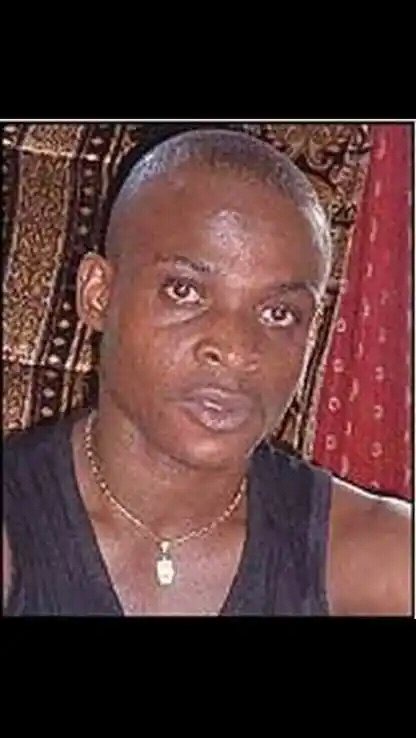 He was born Okwudili Ndiwe, Derico Nwamama was literally born the day he killed Chiejina. Chiejina was the king and Derico was his friend and colleague until Derico murdered him. The details surrounding the events leading to Chiejina's death remain sketchy but some source said there was a disagreement over territory which led to an argument between them.

Another source said Derico killed Chiejina after the later killed Derico's father as revenge, it was alleged that derico led the police to arrest his boys. The details may not be right but what is certain is that the death of Chijiena led to the birth of Derico Nwamama.

Derico was so feared and ruthless he would send threatening messages to the police, stating that they would pay for the death of his gang members. 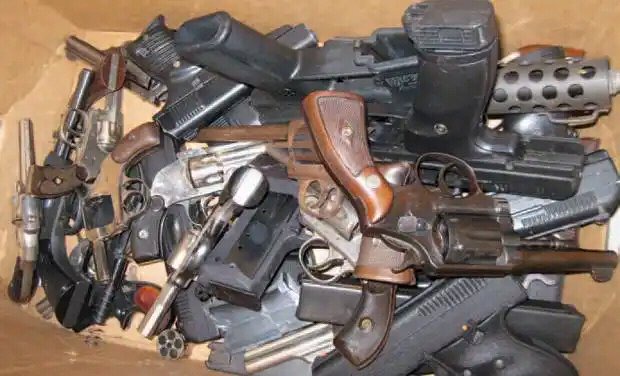 Derico looted commercial banks in Onitsha, marketers were not left out, even travellers passing through the state had their heart in their mouths.

All the way from Nnewi, to Nkpor, to Onitsha, even down to Asaba, Umuleri to Ihiala, the name "Derico Nwamama" sent shivers down the spine of residents and citizens. Derico was also a master of luxury bus robbery.

In May 2001, the police launched "Operation Derico", all in a bid to apprehend the notorious armed robber but instead, only some members of his gang were arrested and Derico continued his operation without checks.

Of the numerous crimes committed by Derico and his boys, the attack on a 59 seater luxury bus was regarded as the most ruthless. In December 2000, Derico and his gang attacked the bus, which was about to depart for Lagos, along the popular Upper Iweka Road. Just after robbing all passengers of their money and properties, Derico decided to murder everybody on board including the women and children. Only four people miraculously survived the massacre. 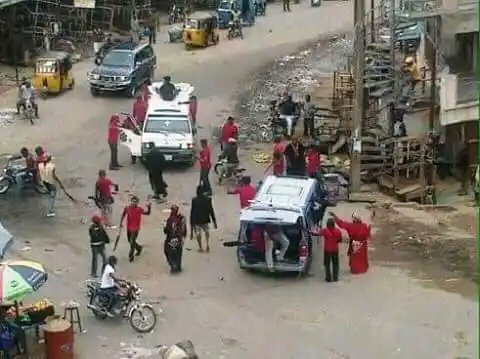 The incident left the then governor of the state, Chinwoke Mbadinuju with no choice but to sought the help of the ruthless and feared Bakassi boys (their story can be read on this page). 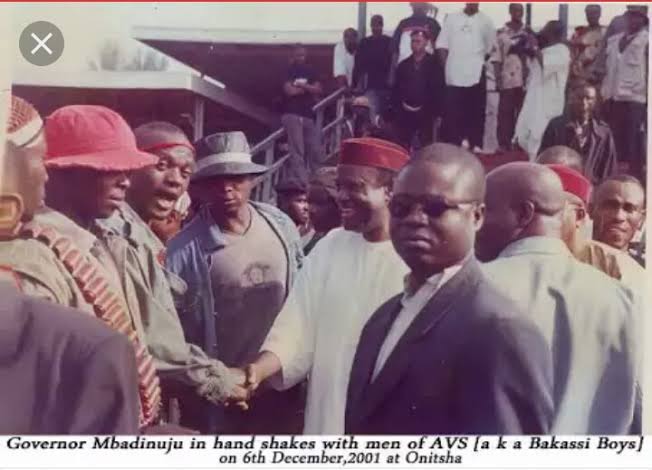 The 3rd of July, 2001 signalled the end of Derico Nwamama, who was on his way to Onitsha from Agbor. The Bakassi boys were already at the bridge apparently waiting for him. They stopped the bus he was in and in very fast fashion, Derico jumped out of the window to escape. In a reflex-like response, a member of the team chopped off his left ear and Derico unsurprisingly fell down writhing in serious pain.

In an ironic and unfortunately funny scene, Derico started crying and begging for his life. He was however taken to Borromeo hospital for treatment due to the fact that he was bleeding seriously. 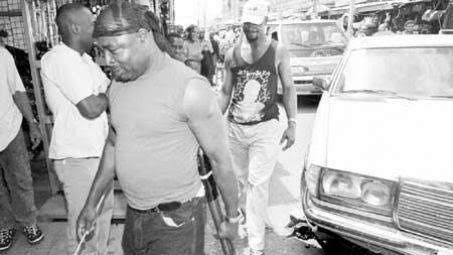 The news of his arrest spread like wild fire in a dry harmattan season, soon people were jubilating like their name was found in the book of life. Just less than a week after his capture, (9th of July 2001), the Bakassi boys known for showing no mercy to criminals did what was earlier on predicted. Singing and chanting war songs, they drove him all over the town and stopped on the infamous Ochanja Market junction along Upper Iweka Road in Onitsha. 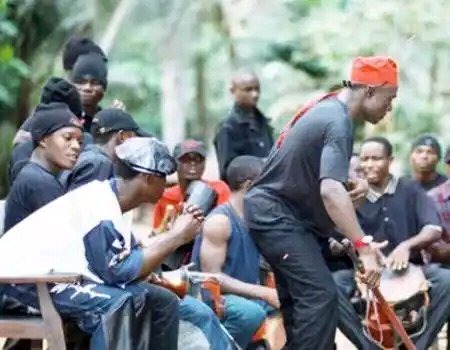 Waiting to witness the final judgment were residents numbering in their dozens. Derico was pulled down from the bus, obviously tortured and looking weak. One of the leaders and commanders of the Bakassi boys, known as Okpompi, addressed the crowd, reminding them that the group is against crime and will keep fighting crime and criminals in the state, then he handed the microphone to Derico who was then shaking like a leave on a body of water. 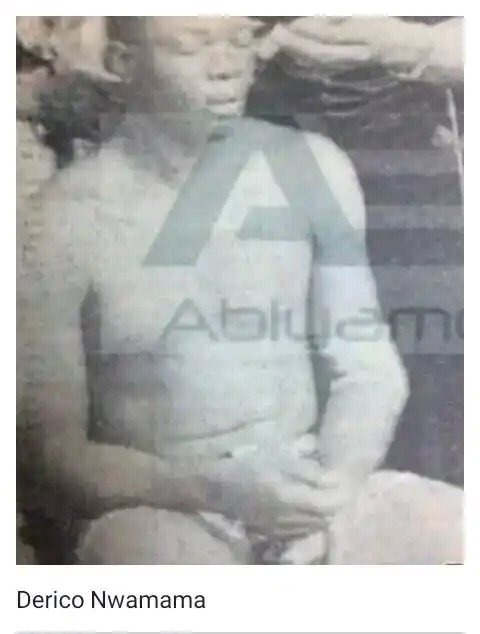 "My name is oddy, alias Derico, alias Nwamama, I beg you, the people of Anambra state, please don't kill me, I don't like evil. It was when I killed Chiejina that people though I'm a strong guy. I trust the Bakassi boys, they are strong, please mercy for me. People just believe I'm a strong guy".

He Reportedly claimed of having very powerful protectors in places of power in the country. Unfortunately, what followed was a display of brutality as one of the boys, with a speed that could be likened to that of light, let down his sharpened cutlass which landed on Derico's neck. And it left his body.

The crowd heaved a sigh of relief but as far as the Bakassi boys were concerned, that would serve as a lesson for anyone planning on going into crime in the future. Derico's remains were doused with fuel and set ablaze. 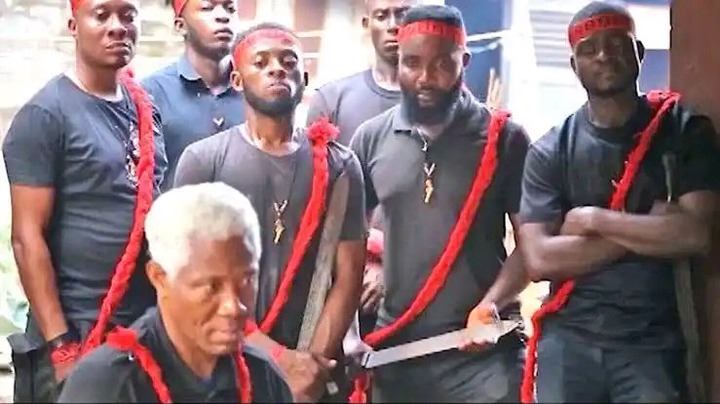 He Reportedly killed close to 200 people and 25 policemen at least. He was just TWENTY Two (22) years old at the time of his death. Crime does not pay.