SAD Story of Man who Lost Eye to SARS

By PopeHarry (self meida writer) | 6 months 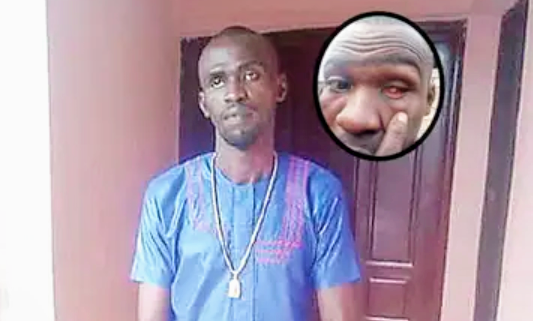 None of the tales of victims of Special Anti-Robery Squad (SARS) operatives brutality is good but for Anthony Onuagbara, living daily with one eye knowing he had two before his encounter with them is really sad for him.

Onuagbara, a graduate of Marketing from the Anambra State University (now Chukwuemeka Odumegwu Ojukwu University) while a Corps member serving with the Ekiti State University, Ado-Ekiti in 2012 was at the copers lodge at Adebayo area of Ado-Ekiti when SARS operatives stormed the compound beating everybody up.

They allegedly hit him with the butt of their gun on his right eye leading to loss of sight in it.

Sequel to their visit, a fellow corps member at the lodge had brought home a prostitute but had an argument with her over payment. She stormed out, returning with the SARS operatives.

The corps members were accused of raping the lady and given the beating of their lives.

Onuagbara confessed that, "i thought I would die that night".

His ordeal was not over as he was hauled to the police station where despite insisting he was innocent, the OC SARS (officer in charge) brought out some weapons, placed them before him and took pictures.

And boom!, He was arraigned for armed robbery.

Help came his way through another corps member, a lawyer, who involved a Senior Advocate of Nigeria, SAN who fought the case untill he was acquitted.

After that, Onuagbara wrote a petition to the police and according to him, some Policemen came to his house with the OC SARS who was badly beaten and asked if he recognized the men that brutalized him and he pointed them out. He was however afraid for his life, seeing the looks in the SARS man's eyes and relocated from his home.

He now lives in Abidjan, Côte D’ Ivoire but summed up his sufferings thus, "I always cried. I cried for many reasons: One, I lost one eye all of a sudden, not because I committed any offence, but because some people just oppressed me. "