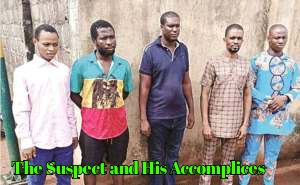 A 29-year-old man from Isi-ala Mbano, Imo State, was hacked to death by his friend and colleague over 13 million Naira he had in his account. According to reports, the beheaded victim is Identified as Abuchi Wisdom Nwachukwu. Abuchi informed his friend, Moses, that his elder brother who is based in South Africa, sent 13 million naira to him. Late Abuchi told his friend that the money was meant for the completion of his brother's building.

Abuchi never knew that telling his friend about the money was the worst mistake of his life. Late Abuchi's friend, Moses, killed Abuchi during a night shift at the table water company where both of them worked in Auchi area of Edo State. Moses hacked Abuchi to death, and went on to behead him. Moses went ahead and dumped the headless body of Abuchi in a bush close to their company.

After killing his friend, Moses took the victim's phone and ATM. Moses took the ATM to some fraudsters who helped him to withdraw 2.2 million Naira from the victim's account. After withdrawing the money, the suspect also withdrew money at different POS shops across Edo State.

Abuchi's body was later found by the Edo State Police Command. The Policemen couldn't recognize Abuchi because his body was headless. Abuchi's family had been trying to reach him on phone, but they couldn't because his phone was switched off.

Abuchi's brother who was based in South Africa, wrote a petition to the Inspector General of Police, Adamu Mohammed after some months of his brother's disappearance. Deputy Commissioner of Police, Abba Kyari, led some operatives of the Intelligence Response Team, to investigate the sudden dissapearance of Abuchi.

The policemen were able to trace all the ATM withdrawals which Moses had done in Edo State since Abuchi's dissapearance. Finally, the Policemen were able to trace Moses to a hotel located in Auchi, Edo State. After the arrest of Moses, he confessed and also led the police to the arrest of his accomplice in the murder of Abuchi. The arrested persons include, Yusuf Sagiru, Tony Bright, Terence Okochukwu, and Jahswill Ogbonnaya.

According to the confessional statement of Moses, his accomplices helped him to withdraw a total of 6 million Naira from Abuchi's account. Moses went on to confess that he was the one who taught Abuchi how to operate the water machine when he was newly employed in their water company. Moses also said that he later became very close friend of Abuchi.

Moses went on to state that Abuchi told him that his elder brother had been sending him money which was meant for his building project. Abuchi also showed Moses the recent alert of 13 million. Moses said that he decided to kill his friend so that he can steal the money. Moses tricked Abuchi to tell him the password of his phone. Moses searched the phone and discovered Abuchi's ATM pin.

Moses lured Abuchi outside their factory and stabbed him to death. Moses also confessed that he beheaded Abuchi so that nobody can recognize him. Moses confessed that he took the ATM card to his accomplices who hacked the account and withdrew 2.2 million. Moses also claimed that Abuchi's spirit has been disturbing him ever since he killed him. The arrested accomplices also confessed to the crime.