Kidnapped ex-Taraba senator cries out to Ishaku for help

How Zidane made La Liga the priority

Old rivals square up in FA cup at Wembley

Between Toyin Lawani and son

Dayo Amusa: It’s better to be single than be in an abusive relationship

Here’s why Yinka Davies slowed down long before turning 50

Osita Iheme: Nollywood has changed since I played kid character

Dekunle Fuji: I lost my memories for many years in US

I only got N500 for killing my boss, says Ibadan serial killer

My life in ruins, says man who lost wife, 3 kids in auto crash

NDDC: I was pressured to spend N10b as Christmas ‘palliatives’ — Nunieh

Olafeso: ‘I won’t step down for Ajayi’

Nigeria loses $3b to gold smuggling

Ten useful things ‘Google Search’ can do for you

I did plastic surgeries to enhance my flat buttocks –Cossy Ojiakor

US Congressman, John Lewis, dies at 80

Though in prison for two years, I still want to end up a famous footballer — Freed 14-year-old who mistakenly pushed Osun landlord to death for fighting with dad over rent

Why we recruited vigilantes to flush herdsmen out of our forest –Oseme, Delta council chairman

My late husband’s intelligence endeared him to me –Bamgbose, Society of Women Accountants of Nigeria chair

Google to overhaul Gmail, as competition with Microsoft heats up.

Russia, China out to undermine US election, says Biden.

ONDO 2020: I’m ready to apologise to those I offended ― Akeredolu

Oyo to consider people with HIV for employment

Arteta opens up on FA Cup chances, as Arsenal take on Man City

Mourinho says Spurs must be realistic in their transfer plans

How new inventions can fight spread of coronavirus indoors.

I beheaded my friend because of N13m in his account — Suspect.

Politics of Land and the Airforce in Enugu

Ondo Guber: No going back on indirect primary –Gov Bello

Tragedy in Ore as 18 perish in road crash

BOFIA: NDIC boss calls for harmonisation of roles with CBN

Over 15 million children under 5 to face acute malnutrition in 2020 in West, Central Africa

Full Text: Magu's point-by-point defence of allegations against him

COVID-19: How states are preparing to reopen schools

Ondo Guber: No going back on indirect primary – APC

Abdullahi Biffo: Kwara Utd would have escaped relegation even without COVID-19 crisis

I've Been To Church Only Once In My Life ' Actor, Ninalowo Bolanle Drops Bombshell

COVID-19: Seun Kuti Reveals What He Did After His Wife Sneezed In Their Home

Revealed! How COVID-19 Transport Restrictions Led To Deaths Of Pregnant Women In Nigeria

Suspect Arrested In Murder Of Founder Of Gokada In United States

UNDP shops for strategist for Buhari

Bolaji Abdullahi: If airlines can operate, students can write WASSCE

How Ibrahimovic fired up Milan for Juventus showdown

Pep's fighting talk shows he has Man City in his soul

¡Vamos Leeds Carajo! Bielsa's boys back in the big time

Guardiola: No doubt Thiago can play in Premier

'Arsenal should be looking at Ings in case Aubameyang leaves'

Spurs need to be realistic with transfers - Mourinho

Milan has always been special to me – Kjaer

'There was no reason for me to leave Chelsea' 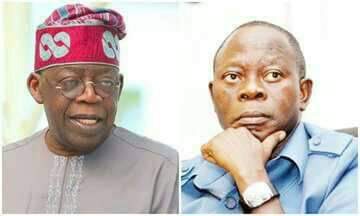