"With My 9Years In The Force, These 7 Things Should Be Done To The Nigerian Police" - Oni Foto Says

By Joethewriter (self media writer) | 1 year ago

"With My 9 Years In The Force, These 7 Things Should Be Done To The Nigerian Police Force" - Oni Foto Says. 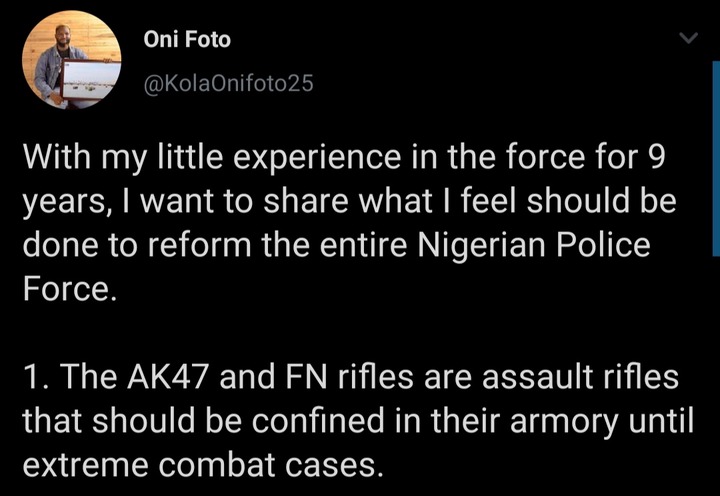 With my little experience in the force for 9 years, I want to share what I feel should be done to reform the entire Nigerian Police Force.

1. The AK47 and FN rifles are assault rifles that should be confined in their armoury until extreme combat cases.

The AK47 should be taken away from our streets, a pistol will do a good policing job.

In advance countries their police don’t carry assault rifles, only the military does and you don’t see them on the streets until extreme cases. 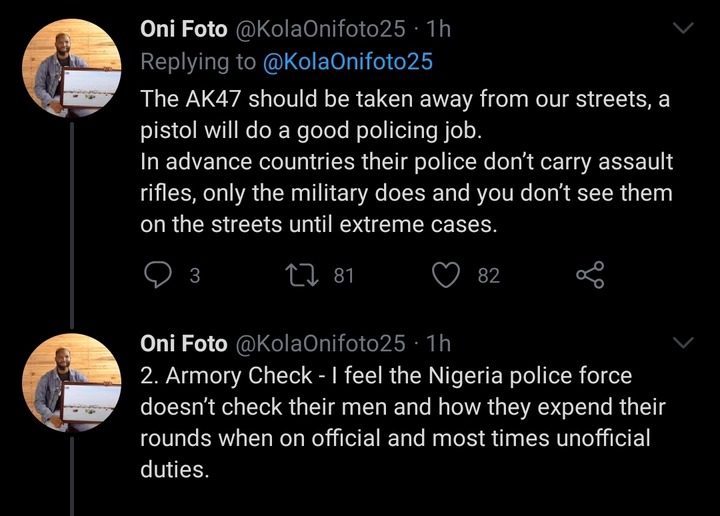 2. Armory Check - I feel the Nigeria police force doesn’t check their men and how they expend their rounds when on official and most times unofficial duties.

A policeman will fire a round for unjust cause and nothing will happen when he gets back to his armourer at the station!

In the Navy, we even fill “round expend forms” when we get back after every operation.

Also to add, a policeman shouldn’t take their weapons home for no reason.

All weapons issued out should be returned to the station every day!

There are forms and weapon logbooks in the armoury.

Even if you draw out the same weapon from the armoury ten times in a day, there is each record for it.

The armourer should never get tired of updating weapon logbooks.

Does our Nigerian Police force have a logbook?

3. The “Provost” department - in the armed forces we have a provost department who keeps personnel in check.

From dressing to conduct, they check and put us in line when we go way out of line.

In the Army, we have the “Military Police”.

In the Navy, we have “Naval Police”

Our dear @PoliceNG should create a provost unit that will be effective in checking their officers.

From the haircut on their heads to their uniform and the boots they wear should be checked at all times.

In the military, it is every morning when you report to base!

4. Once every week in the Force, we discuss a topic from the “Armed Forces Act Cap A20” to remind personnel and also inform and educate them on what they cannot do as a service personnel

We read out the punishments and offences

This happens in every naval base and units all over.

They remind us every time of our duties as service personnel and every day we carry it in our minds that we are not to misbehave.

The Police needs a police act - a new one! That will be available for every personnel to read and know the consequences of their actions.

The faces, names and service number of every person should be in the system and well accounted for in any station or state they serve.

Everyone should be in the books

There is no unknown Soldier!

6. The Station - This name in our minds means “end of the road”

A police station shouldn’t be the end of the road for anyone regardless.

It shouldn’t be a place where a constable on the counter will molest and maltreat you before your statement is even taken!

A station is not a place where you get the feeling of “all is over”.

Also to note that the law says within 24 hours

7. Training - In the armed forces, personnel’s training never ends until they retire.

Subsequently they for course training in Nigeria and abroad.

This trainings refresh the mind and also reminds them what their primary and secondary duties are!

A police station should not be a negotiation point.

This training I am talking about is after the initial recruitment and police college training.

I am talking about advanced course training in every police department where they get further training and lectures on their departmental work and as well their policing duties!

Content created and supplied by: Joethewriter (via Opera News )