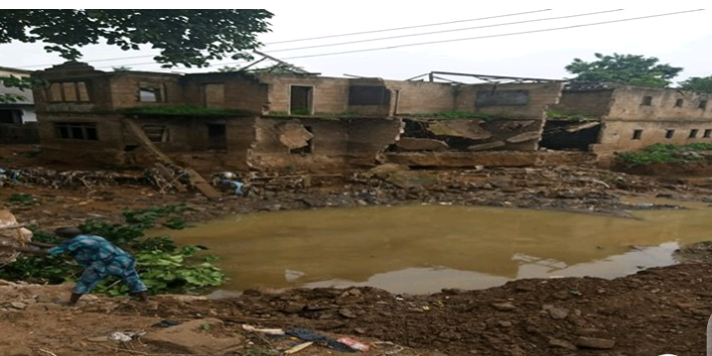 (Photo used for illustration purpose only)

The Oyo State Police Command has lost three constables who drowned in a bridge washed away by flood on Balogun Street in Oyo town.

The policemen, attached from Oyo Atiba Police Division, trailed some hoodlums to the area when the thugs started running towards the bridge.

According to an eyewitness, one of the hoodlums reportedly jumped into the water and the policemen jumped after him during which the officers drowned.

The witness, who gave his name as Okunola Abbas said, “On Sunday, July 12, some policemen from Oyo Atiba division were passing through Balogun Street in Oyo town and saw some hoodlums smoking weed in the area.

“The area is notorious for hooliganism. The policemen parked their van and four of them started running after the hoodlums. So, being their base and knowing the area well, the hoodlums jumped into the flooded bridge.

The policemen chased one of the hoodlums to the bridge and three of them jumped after him.

“They were not lucky as they were swallowed up by the mud. It was later that a bulldozer was used to bring their corpses out.”

The state Police Public Relations Officer, Olugbenga Fadeyi, confirmed the incident, adding that four suspects had been arrested by the police over the incident.

He said, “The policemen carried out a raid. They went to a criminal hideout in the area. Some of the hoodlums ran and one of them jumped and entered a canal. The policemen followed them.

Onwuka Steve: This is the kind of news we want to be hearing, them go use their mouth explain give God their intentions when they catch the guys Dem!!!.

Adaeze Eze: So our Nigerian police men cannot even swim🙆🙆. How did they pass all drills and become policemen???

Ogumola John: They thought they can catch them but weed smoker has inspiration and tactics and they are very sophisticated but our nigeria police never knew. But i think is bodacious.

Jegede Gideon: Wen ur high u can walk on water that’s why he didn’t drown, but the police dey didn’t get demselves high so de drowned. Weed gives you cloud 9 feeling.

Agbo Michael: So could it be that it was all a caculated move by theses weed smokers to end these officers through the chase?

They officers too may just be too senseless. Just imagine Nonsense kind of chase, and the weed smokers survived? So sad.