Breaking News In Nigeria This Afternoon, Thursday, 16th of July, 2020

N81.5bn probe: Drama as NDDC boss, others walk out on Reps. Top officials of the Niger Delta Development Commission have walked out of the venue of an investigative hearing being held by the House of Representatives.

The House Committee on NDDC is probing the alleged mismanagement and illegal spending by the commission, especially a total sum of N81.5bn spent between January and July 2020.

The Acting Managing Director of the NDDC, Prof Kemebrandikumo Pondei, who led members of the Interim Management Committee of the commission to the hearing, demanded that the Chairman, Mr Olubunmi Tunji-Ojo, steps down as he had also been accused of various “crimes” against the commission.

Several members of the committee, however, dismissed the request, asking the NDDC to petition the Nigeria Police, Economic and Financial Crimes Commission, Independent Corrupt Practices and Other Related Offences Commission or the Department of State Services for any infraction allegedly Commission by Tunji-Ojo.

Members of the IMC stoop up and walked out of the venue.

Consequently, the committee issued a warrant of arrest against the NDDC management, asking that they must account to Nigerians. The Nigeria’s House of Representatives has ordered the Inspector-General of Police (IGP), Mohammed Adamu, to quickly arrest and probe the Acting Managing Director (MD) of the Niger Delta Development Commission (NDDC), Professor Kemebradikumo Daniel Pondei, for what it described as ‘contempt of the legislature’.

The House Committee on NDDC, had summoned the Interim Management Committee (IMC) of the NDDC to make presentation at the ongoing investigative hearing into the financial recklessness at the Commission.

It was established from the previous sitting that the IMC recklessly spent N81.5bn from the coffers of the Commission from February to May 2020 without due process.

But the Acting MD, when called upon to clear the allegation, rather, questioned the credibility of the House Committee.

According to him, he had no confidence in the Hon. Olubunmi Tunji-Ojo-led House Committee on NDDC, adding that he would not speak before the panel.

Though various members of the committee tried to make him see reasons why he could not dictate to the National Assembly how to run its oversight functions; Prof. Pondei rather walked out on the committee.

Irked by the show of disrespect to the lower chamber, Spokesman of the House, Rep. Benjamin Kalu, moved a motion, invoking section 89 of the 1999 constitution (as amended), to issue a warrant of arrest.

The motion was seconded and passed.

The c also passed a vote of confidence on the Chairman of the Committee, Rep. Tunji-Ojo, saying his integrity and those of other members of the committee was not in question.

The committee, however, continues with the investigative hearing.

Governor Wike is a man - Ex-NDDC boss, Nunieh recounts her rescue from police. 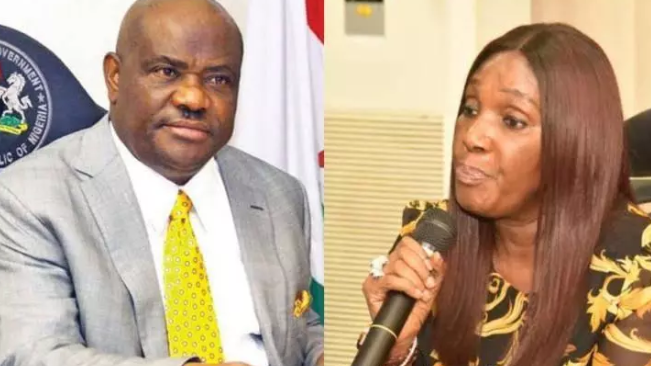 The former Managing Director of the Interim Committee of the Niger-Delta Development Commission, Joy Nunieh has thanked the Rivers state Governor, Nyesom Wike for coming to save her from an attempted arrest by security operatives.

Speaking to newsmen on telephone, Nunieh said she was surprised at the invasion of her home by Police officers, who came without an arrest warrant.

The former MD of NDDC, therefore, thanked Governor Wike for living up to his promise of protecting her.

“Senator Magnus Abe called me after a while that the CP in Rivers did not really know about it and that the CP was going to reach me. The CP did reach me and said he was not aware of what was going on.

“The CP asked that I send him my address and which I did and then I saw the cars come in. So, I asked if that was the CP, and they said no. Fortunately, I was just wise enough. I stayed by the door, and they wanted to drag me, so I just banged the door, so they can’t come in.

“I needed to see the warrant. We are not in a Banana Republic. So, as they were still trying, my Governor came and sent them out that why would they come to arrest a woman like an armed robber that they should leave the compound.

“The Governor then said I should enter the car with him. So, I am now with my Governor in Government House, Port Harcourt.

“I really want to thank the Governor. I really don’t know what to say but my Governor is a man. He is a man. He didn’t just say it that nothing should happen to me, he came to my rescue. I want to say thank you to my Governor,” Nunieh said.

Sources say Joy Nunieh is being invited for questioning by the Police, an information yet to be confirmed by the Rivers state Police Command.

The Minister of Niger-Delta Affairs, Godswill Akpabio and Nunieh have been embroiled in war of words over allegations of corruption in the NDDC.

The former MD of NDDC had accused Akpabio of sexual harassment, budget padding, fraud, among others, which the Minister has denied.

Man accused of brutalizing his wife by burning her skin after accusing her of gossiping. A man has been arrested for allegedly brutalizing his wife and his stepchildren in Anambra state.

According to people who claim to be close to the situation, the man identified as Iwuchukwu Anajemba Samson is in the habit of brutalizing his wife, Ifunanya Georgina Anajemba, and her kids at their home at Alex Anajemba Street, Akabo Village in Mbaukwu, Anambra state.

He allegedly came home on Tuesday, July 14, and accused her of gossiping about him with their neighbours. He then attacked her.

Photos of the woman’s scalded skin were shared on Facebook and her husband was accused of being responsible for it. The skin of her legs was peeling, exposing her flesh. The skin on her fingers was also swollen and about ready to burst open.

According to reports, this comes a few weeks after he allegedly poured fuel on one of his stepdaughters and ignited it with a match stick.

Below are more photos showing the aftermath of the alleged domestic abuse incident.