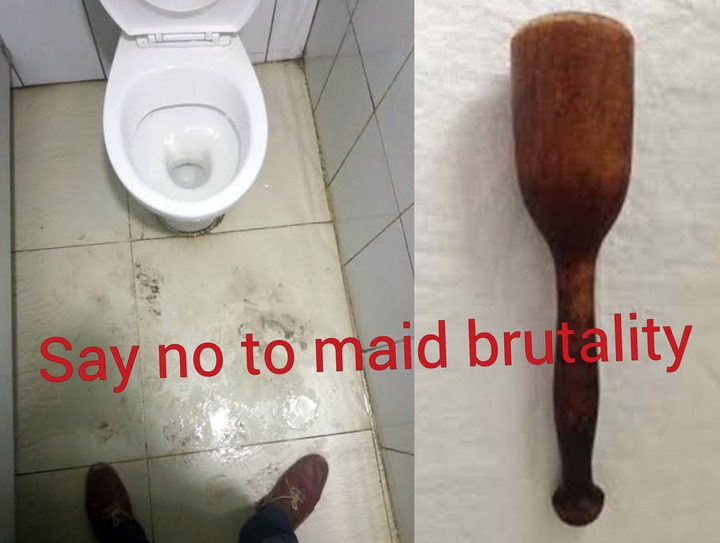 A woman identified as Mrs. Binta M.K. has reportedly brutalized her housemaid, Happiness Dauda, by locking her up in the toilet for six days without giving her food or water.

Mrs. Binta M.K who resides in Wuse II, Abuja with her husband, allegedly assaulted and brutalized her maid, leaving her battling for life in the hospital over a missing mobile phone.

The maid who is said to be 26 years old, was locked up inside a toilet for six days with no food or water, after being brutalized by her boss.

According to a relative who shared the story of the incident, Happiness survived by drinking her own urine during the time she was locked up in the toilet.

Narrating her ordeal, Dauda said that her madam brothers come to their house everyday and after they left on a particular day, her madam started asking her about a mobile phone.

Happiness told her that she knew nothing about the missing phone and Mrs. Binta started hitting her with mopping stick, wire, and a mortar pestle until she was unconscious.

She said that Mrs. Binta threatened to kill her with a witch doctor and she was forced to confess to stealing the phone under duress.

Mrs. Binta then started brutalizing her physically and then threw her into the toilet and locked her up for six days.

According to Happiness, she was brought out by her madam on the sixth day, and dumped on the road side with the sum of N1000 to return to her family.

One of Happiness relatives revealed that she was rushed to the Wuse General Hospital in Abuja, and the case was reported to National Agency for the Prohibition of Trafficking in Persons (NAPTIP) and the police.

An official of the NAPTIP handling the case, Mr Magnus confirmed the incident but refused to answer questions regarding their findings and the whereabouts of Mrs. Binta and husband.

A relative of Happiness, David Dogo also disclosed that an emissary from Mrs. Binta and her husband came to him in the hospital, asking him to drop the case adding that he'll be compensated.