Lessons From Recent Bitcoin Hack-Scam of The Tweeter Accounts of Bill Gates, Bezos, Obama & Others.

By JudeBari-Be-Op (self media writer) | 1 year ago

One of the dangers and evils of our 'Internet Age' are 'Cybercrimes' which includes; hacking, internet stalking and fraud, etc. Hacking is a form of breaking & entering, impersonation and deception though it is now done online to people's electronic devices, accounts, emails and handles. 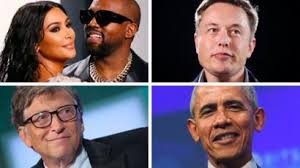 Recently, the Tweeter Accounts of some prominent personalities, celebrities and billionaires were hacked and the accounts were used to scam thousands of their Bitcoin.

This was such a terrible incident with its attending damage on the reputation of the billionaire celebrities and huge losses in the lives of the scammed victims. However, there are a few lessons we can come away with from the unfortunate incident, they include;

The offers that scammers usually display are always so juicy and attractive. They appear so glamorous, all good & true, yet, one should know that, 'not all that glitters is gold'. The allurements of the scammers are always seems all-good and it is against such that one's better reason should ring true that, 'nothing good comes easy'.

In each person's trail of activities and actions, there are always patterns. And so, one ought to be aware of & understand these patterns so as to be able to differentiate the Truth from the Lies, and the wheat from the wheat... And as to the scammers, one should know their patterns of expression; choice of words and language for they are always similar & detectable. Also, one should know the tone and language of prominent personalities and billionaires that one follows online so as to be able to detect when "something is off", when something is out of the ordinary, when something does not add up or it's very unlike them in their tone and expression. For instance, how often do such billionaires do "online giveaways?" And if they do, what is usually the mode, means as well as value of such giveaways..? Surely, knowing this makes all the difference.

3. Don't Be Easily Moved or Pressured:

Along with the juicy offers of scammers comes some undue pressure and deadlines, for instance, the Tweeter Bitcoin Hack Scammers gave a very short deadline of 30mins. Such deadlines alone mounts so much pressure and in such a situation, one's better judgement or reason should indicate that something is off. It is in such circumstances that one should employ something called; 'Delayed Gratification' and one should not let themselves be moved or Pressured so easily.

Greed is 'a human problem' and as the economists say; "man's wants are insatiable". Greed is like a beast or wolf in each and every human person, yet, one has the capacity to either starve & tame it or feed & indulge every of its appetite till it is out of control. It is greed and cutting of corners that makes one fall for scammers. Therefore, if one is able to watch or control one's greed, then one won't fall prey to scammers.

Scammers look out for desperate times and desperate people, for instance, they target 'economically tensed up or challenging time' to display their allurements for they are well aware that many people are desperate at such times. However, it is best never to give in to Desperation for 'despair eats one alive'. And it is at such times that one isn't able to think straight or clearly and one is most prone to making costly mistakes & fall prey to scammers.

6. No One is Invincible:

Who would have thought that people like Bill Gates, Barack Obama, Jeff Bezos and other prominent personalities and celebrities could be hacked especially with all their billions, because with their status and money, top notch securities and devices; I mean, the best of the very best should be at their disposal. This incident of them being hacked goes a long way to show the limitations on the power of wealth and that no one is Invincible to possible attacks... However, an African Proverb holds true that, "if their is no enemy within, the enemy without can do us no harm".

Finally, the unfortunate incident of the recent Bitcoin Hack Scam of influential personalities should teach us that there are evil people with vicious intentions of out there and we should be wise in our dealings. Let us learn these lessons and share even others not reflected here for though evil lurks, we can always conquer.

Content created and supplied by: JudeBari-Be-Op (via Opera News )