Dr Anu, the self-acclaimed plastic surgeon whose practices has led to an outcry in the last few weeks has allegedly been freed after being arrested.

The doctor was taken in for questioning at Panti Police Station following a botched surgery she conducted which reportedly led to the death of former beauty Queen, Onwuzuligbo Nneka Miriam.

A friend of the deceased who has been running campaigns on social media to ensure that justice is served, disclosed that the doctor who has been on the run since her facility in Lekki area of Lagos state was shut down, conducted a plastic surgery on the late beauty queen same year she graduated from medical school and started her internship.

Hello everyone! Most of you remember when this news broke out last year?  Well, this was when late Queen Nneka Onwuzuligbo died after an infection from a botched liposuction and fat transfer surgery at Med Contour.

One point of correction in this story: Late Nneka was never taken to Vedic hospital. She was taken straight from Med Contour to LUTH, in an ambulance. Dr Anu went on the run & eventually came out from hiding. Since then, she has committed more acts of malpractices as can be seen in recent news. Her facility was sealed again two weeks ago by the FCCPC but she went to NMA to play victim & complain of harassment.

Great Nigerians, we need to find out a lot of things: Is Anu a Board-Certified Plastic/Cosmetic Surgeon? Which organization in Nigeria certified her to practice as a Plastic/Cosmetic Surgeon? Is she registered with NAPRAS (National Association of Plastic, Reconstructive, and Aesthetic Surgeons) Nigeria? Does getting a Bachelors degree in medicine and surgery automatically give you the Licence to practice as a Plastic/ Cosmetic Surgery? NOTE: Dr Anu performed this procedure on late Nneka in 2018, the same year she graduated from medical school and started her internship.

Dr Anu has a lot of questions to answer, including why she forged a letter and presented to LUTH emergency unit on arrival, claiming that Nneka was referred to LUTH from General Hospital, Odan. If she were a qualified and certified plastic/cosmetic surgeon, why did she forge a letter claiming the deceased Nneka was coming from General Hospital and not Med Contour??? We have LUTH’s medical report to prove her lies.

Although these kinds of surgeries are elective, please let us fight to bring unqualified, unprofessional and unethical Practioners to book. We are not doing this for ourselves. Let us do this for our loved ones, for our children, for our future. You never know if someone you know/love may be secretly battling with insecurities about their bodies. And if we don’t stop unqualified and unprofessional people like Anu, she will keep preying on those insecurities. God bless you all! 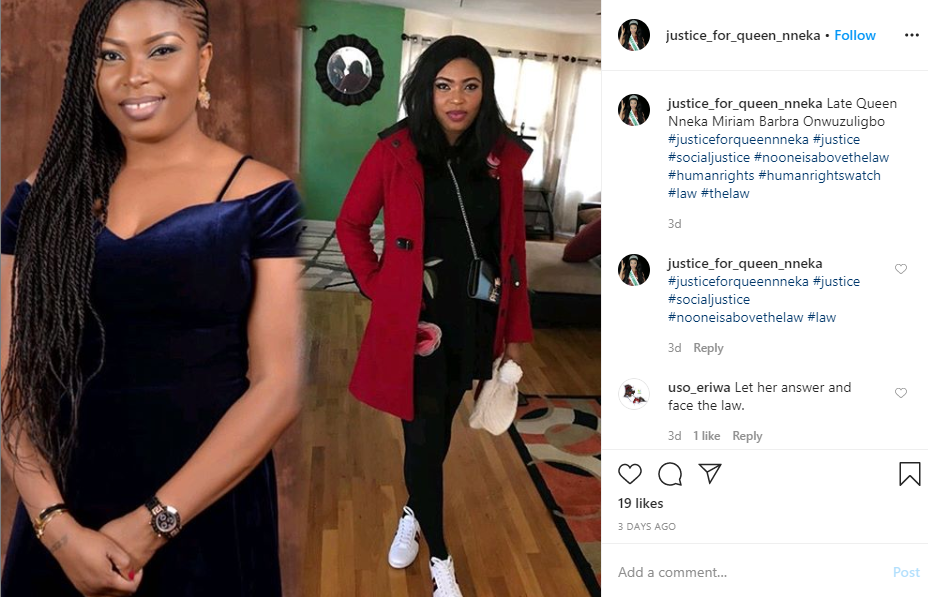 The Instagram user who slammed the Nigeran Medical Association (NMA) over its notice in which it reportedly warned FCCPC officials against invading Dr Anu's property, also shared a petition against Dr Anu's botched surgeries which was described as "unethical".

It was further alleged that Dr Anu who was freed after being arrested by Nneka's family,  has been taking appointments through social media and performing surgeries.

Are the NMA( Nigerian Medical Association) and MDCN (Medical & Dental Council of Nigeria) backing Dr Anu of Med Contour’s malpractices? They definitely have some questions to answer! (Please swipe)

1. Are these two organizations aware that o2019, Anu FORGED a referral letter from GENERAL HOSPITAL, ODAN, which she presented to LUTH’s emergency unit, when the late Queen Nneka Onwuzuligbo was brought from MED CONTOUR in an ambulance after a botched liposuction surgery performed by Anu herself? And that the deceased Nneka was NEVER at General Hospital Odan like Anu presented?

2. Have the MDCN’s Investigating Panel asked to see the medical report on the cause of death of the late Nneka (whose family petitioned them in 2019 after her death)? If they have, did they see where Prof. Ugburo of LUTH wrote and signed that the deceased was referred from General Hospital Odan (according to the forged letter presented to them by Anu)? If the MDCN saw that report, did it not strike them as odd that the medical report stated that late Nneka was referred by General Hospital, Odan? And if they haven’t called for the medical report, why haven’t they done their due diligence yet, as an Investigating Panel, despite all the numerous allegations leveled against Dr Anu by many victims??? 3. MDCN’s Investigating Panel’s attached a response to the petition stated that they only attend to matters of “professional misconduct against their registered Practioners”. Can they please explain what they mean by “professional misconduct”, and how the numerous allegations against Anu are not of professional misconduct?

4. IS NMA aware that Dr Anu was arrested by the deceased Nneka’s family on July 5th, 2019 and taken to Panti police station, Yaba, Lagos?

5. Are the MDCN and NMA aware that, as at the time Anu was arrested, her facility where she operated on late Nneka, was already sealed by the Lagos State Health Facility Monitoring & Accreditation Agency? And that even though her facility was sealed, Anu was hiding out at AMETHYST HOSPITAL Lekki, taking appointments through social media, and performing surgeries?

That was how Anu got arrested on July 5th, 2019. She was lured through a false appointment. Are the NMA and MDCN aware of all these? If they are not, why have they not yet done their due diligence and investigation on this unscrupulous doctor who has so much blood on her hands?

6. Wouldn’t it be a case of professional misconduct that would cause Med Contour to be closed and sealed by the Lagos State Health Facility Monitoring & Accreditation Agency, last year?

7. Are the NMA and MDCN aware that late Queen Nneka Onwuzuligbo is someone’s daughter, and has a family, and the family and citizens of Nigeria want answers as to why Dr Anu is still allowed to practice as a medical practitioner despite all these allegations, with proofs against her.

8. Are they aware that Anu is playing victim, while she is actually the one who has made many women victims of her malpractices?

9. Are NMA and MDCN aware that Anu performed the liposuction surgery on late Queen Nneka in 2018, the same year that she(Anu) graduated from medical school, a procedure medical experts have said would require at least 7-10 of fellowships, specialist and board exams after medical school and internship?

The NMA and MDCN have a lot of questions to answer, and everyone who signed these letters, has to answer these questions. They have to answer to the Nigerian people, and the world, why they are supporting this doctor and why her medical license has not been revoked yet! 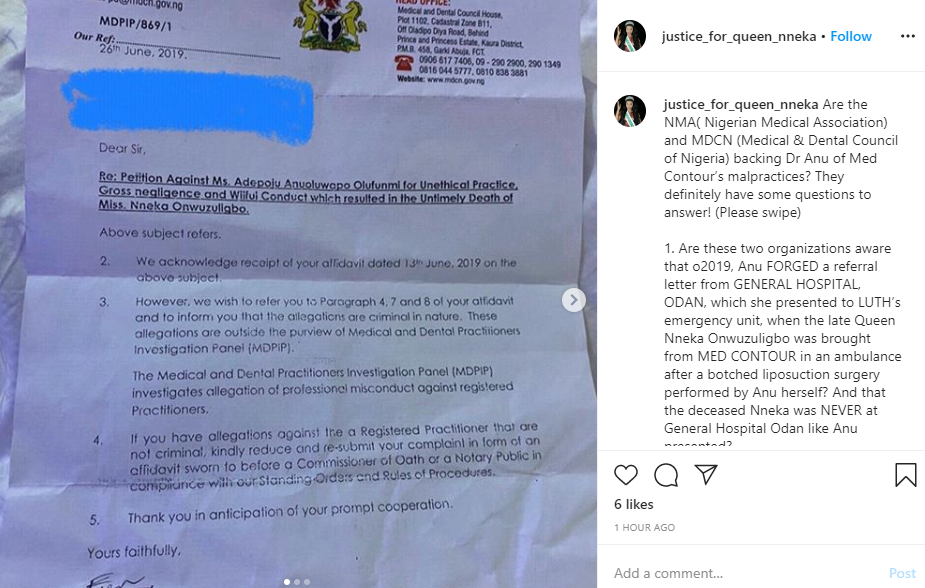 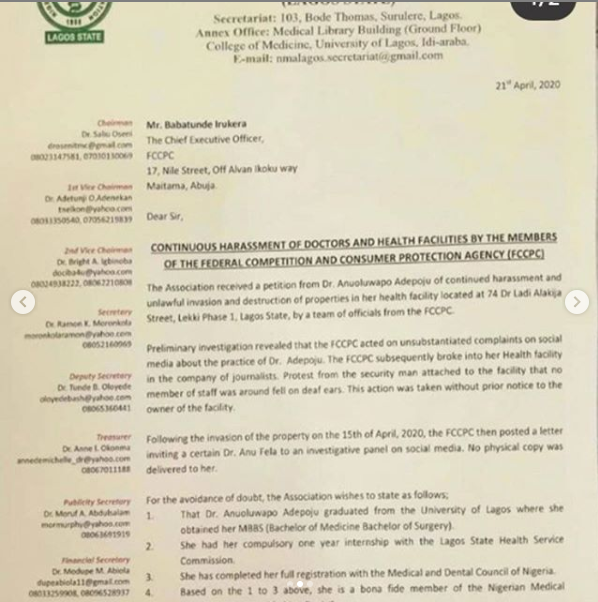 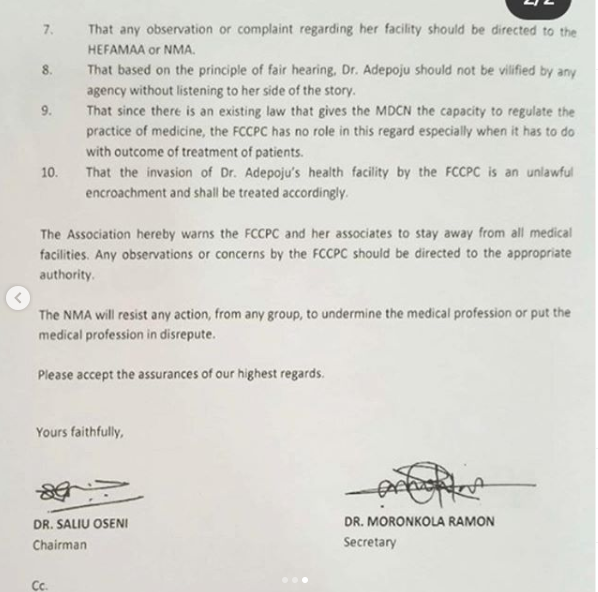 Content created and supplied by: skebo20200 (via Opera News )