The suspended acting chairman of the Economic and Financial Crimes Commission (EFCC), Mr. Ibrahim Magu has described the allegations leveled against him as “nonsense”. 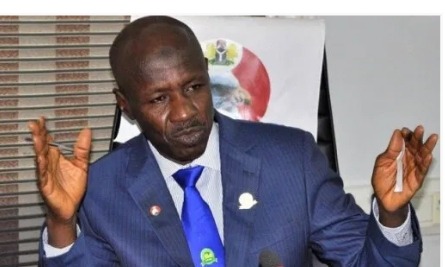 As he claimed, "I was shocked after reading all the shocking allegations against me which are nonsense".

Hours after he was released from police custody, Magu spoke with the Nation and has declared he was shocked when he read the allegations formulated against him to damage his good image.

Mr. Magu was apprehended last week and dragged to the Aso Rock villa in Abuja, where he stood before a committee set up by President Muhammadu Buhari to investigate the EFCC activities under him.

The panel is handled by Ayo Salami, who is a retired president of the appeal court.

“They are nonsense. They are just trumping up charges to spoil my good image and that of the EFCC. I did not loot or convert or divert any public funds to private use. I read all the nonsense allegations and I was shocked,” Magu was quoted to have said.

“The experience I just went through is a case uncalled for, but I see it as one of those risks of the job… we must not give up or relent in any way.”

Mr. Magu, who pledged to keep fighting corruption till the end, commended those who stood by him, supporte,d and encouraged him when he was in detention.

He will ask Nigerians not to give up on the war against corruption, saying: “Corruption kills a nation faster than any other thing and if we don't kill corruption, corruption will kill us".

“I appreciate Nigerians for their support, they should neither be surprised nor discouraged. I am glad to be back, I believe ending corruption in Nigeria is achieveable,” he said.

“Whether I am the EFCC Chairman or not, the anti-corruption war must be unstoppable.”

Mr. Magu’s troubles started after a memo by Malami accusing him of grave misbehavior. He was alleged to have mismanaged the recovered loot and sold seized assets to his associates and colleagues.

A series of allegations have come surfaced since his arrest last week. He was alleged to have acquired a property in Dubai, United Arab Emirates using a pastor as a channel.

He was also alleged to have squandered over N500 billion through a bureau-de-change in Kaduna.

Mr. Magu had earlier denied all the allegations through his lawyers.

The former director of operations at the EFCC, Mr. Mohammad Umar has replaced Mr. Magu as the acting chairman of the commission.