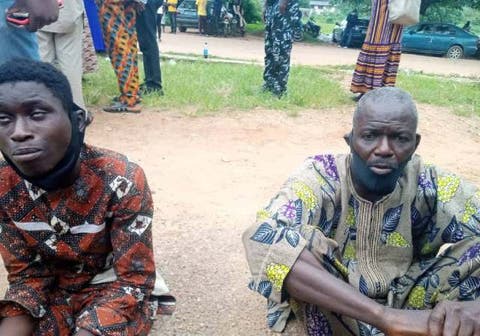 After hot pursuit by the Oyo police command to arrest the perpetrators of the killings along the Akinyele axis in the state, the serial killer suspect of an innocent victims has admitted how he managed to achieve his goals.

While marching out the criminal suspect to the police headquarters, Eleyele, Ibadan on Friday, one of the suspects, Sodipe Sunday (19), revealed that the former herbalist who he worked for was one Adedokun Yinusa Ajani (50) who sent him to carry all these deadly act.

He explained that the shaman instructed him to kneel before him every time he wanted to commit a crime, and he will (Ajani) chant a few incantations and then put something on his tongue three times.

The alleged serial killer said that when he found his victims, he would hit them with a shovel, and when they are in a pool of blood, he would cast several spells and move around the body three times, then return them.

Sodipe said he would support the body with his eyes closed for about five minutes before he left the place.

When asked if he was afraid someone would approach while supporting the body, the serial killer who allegedly said the herbalist had told him that nothing would happen during this time.

He said after the operation that he would return to the shaman who would give the spell again. 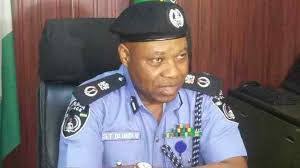 He admitted that he had carried out five such operations, and each time he returned to the shaman, the 50-year-old bought him food and gave him an N500.

Asked about the reason for the murder, Sodipe said he did not know because the shaman only sent him on such an order.

In response, the herbalist, who Sodipe claim he was carrying out the killings for while talking to a journalist denied ever knowing him (Sodipe).

The potion expert said that his mother took him to his house few months ago, saying that he was a strange child and that he did spiritual work for him.

However, he said that he returned with the boy two months later and asked him to learn how to become an herbalist.

"He spent six days with me when I sent him away because I was not happy with his behavior and was immediately arrested by the police," Ajani said.

Enwonwu said the crime coincided with his time as Commissioner of the State Police, and he immediately took action to bring the perpetrators to justice.

The police commissioner said the cellphone of one of the victims from Shehu Usman was found by police. "During interrogation, the suspect denied involvement in the crime, but provided useful information which later led to the capture of Sodipe and Ajani."

Enuonwu said the suspects were responsible for the killing of wasilat Adeola, Barakat Bello, Grace Oshiagwu, Moed Tirimisiu, who was only five years old, and the attacks on Adeola Azez and his daughter Dolapo Oyeemi, both survivors.

The main suspect, Abiodun Oladejo, 35, is believed to be responsible for the murder of a woman, Oluwasayo Fagbemi, who was killed in front of her house in the Sasa area on June 24, washing dishes at 5.40pm.

Three other suspects were also arrested in connection with the murder and another attempted murder.

When he spoke, Olasoji admitted that he had killed his victim with a stick and wiped his blood with a handkerchief for ritual purposes.

The police also included rapist Idowu Ajayi, who allegedly raped a 42-year-old physically handicapped woman, Kemi Adeniyi, along with three other suspects who were still at large.

However, the suspect denied involvement in the crime and claimed that he was in his business at the time of the incident.