THE MAGU SAGA: Detailed report of what happened from Magu's arrest till the moment he was released

Suspended EFCC chairman Ibrahim Magu has been in detention where he has been facing charges made against him. He was recently granted bail on Wednesday 15th of July 2020. Here I will walk you through everything that happened from the time Magu was arrested, to his allegations,, those involved in his alleged crimes till the day he was granted bail

When Magu woke up on the 6th of July 2020, he was unaware that he won't go back to his house till Wednesday July 15. Magu was arrested by operatives of the police force criminal intelligence Department on his way to his office. There were different versions of how the arrest was made.

Although the DSS claimed that Magu was not arrested that he was only taken in for questioning.

One account said the agents arrested him immediately they saw him and took him to the Presidential Villa to face the panel that was to investigate him.

Another said the agents had laid siege and waited for Magu at the entrance of the EFCC office at WuseII , the agents then blocked Magu's escort with their car which led to arguments between the security agents and Magu's security before Magu decided to follow the agents.

The allegations against Magu was spearheaded by the indictment made by the Attorney general of the federation Malami Abubakar against Magu. He accused Magu of corruption, insurbodinations, abuse of power, re-looting of recovered funds etc.

Although Magu allegations were many I am going to list just 10 major allegations made against him;

2. Alleged ‘relooting of recovered loots’ and Sale of seized assets to cronies, associates and friends

THE SEARCH FOR EVIDENCE - HOME AND OFFICE

In the hope of finding evidence and incriminating materials to prosecute Magu with, the Presidential Panel instructed the Police Force to search the house and office of Magu.

The officers went to his house in the evening of July 7 which is atAbduljalil Street, Karu Site, on the outskirts of Abuja. After they were allowed entry by his wife at the gate, the officers searched the house for hours, before eventually leaving the premises with some vital documents which is said to contain some evidence.

Also Magu's office at the EFCC was also ransacked at the orders of the panel. The detectives arrived at the office and combed it which later led to the discovery of a very vital computer that will help in the investigation.

Another event that unfolded during the investigation was the allegations against one pastor named Emmanuel Omale, a pastor at Divine Hand of God Prophetic Ministry, Magu was accused of using the Pastor to siphon the looted funds that were returned. The report claimed that Magu had travelled to Dubai with the Pastor and had used the name of the Pastor to buy a property of N573 million.

It should be known that it was this same pastor that prophecied that Magu will be reinstated by President Buhari after his first tenure finished.

Pastor Omale had in turn took to the media to deny this allegations.

The National Financial Investigation Unit was in charge of keeping necessary evidence for all crime relating to fraudulent activities.it is a body contrived from EFCC. The officials were asked some questions on Thursday by the Panel which involves presenting some documents.

The officials told the panel that they are not with the documents as they cannot be carrying evidence as important as that about. They were instructed to bring the evidence the next.

When the officials go to the office the next day which was on Friday , they were surprised as the office had been attacked in the middle of the night with many of the computers containing evidence destroyed or taken away by the unknown men.

The Director reported to the president about the Incident. Although there have been some arrests made concerning the event.

After spending several days in detention and been asked series of questions, Magu decided to write a letter to the IGP to request for Bail through his legal representative Oluwatosin Ojaomo.

The IGP however replied Magu yesterday that it wasn't the Nigeria Police force that was keeping him in custody but the presidency. Which means on the Presidential Panel can order his bail ,he therefore urged him to ask the Panel for bail and not the Nigeria Police Force.

Part of his reply read;

“The Inspector-General directs that your attention be drawn to the fact that the Nigeria Police Force is not investigating Ibrahim Magu and he is accordingly not being detained by the police by the Presidential Panel that is investigating the activities of the Economic and Financial Crimes Commission.

Just few hours after the IGP replied Magu's bail request, the suspended Chairman of the EFCC was released on bail.

This was confirmed by his lawyer Wahab Shittu. While answering a phone call from Vanguard, Shitu said that It is true that Magu has been granted bail and he is presently at his house in Abuja.

His words: “Yes, I can confirm to you that Magu has been released on bail. He is currently in his house as we speak.” 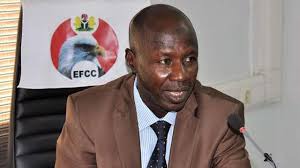