It was gathered that the unfortunate incident occurred at 12/12 area of Ore In Odigbo LGA of Ondo State, also arrested for the crime was one Jeremiah Monday.

However, Mr Bolaji Salami, who is the state commissioner of police, paraded the suspect at Alagbaka Akure, the state Police headquarters, the police boss stated that, iyabo asked her current boyfriend to kill her ex boyfriend (Suleiman Azeez) to enable them get marry.

Further speaking, the commissioner for police said, “25years old Suleiman Azeez left home for his normal Okada business but never returned, his remains was later discovered at 12/12 area Odigbo in his pool of blood.

“upon investigation by the Special Anti-Robbery Squad Akure, Police detectives arrested one Adedayo Sunday who is 25years old and Jeremiah who is 20years old, the both are natives of Odigbo, they were arrested while trying to sell the motorcycle stolen from the victim.

“they both admitted to the murder, Sunday Adedayo said, his girlfriend one Iyabo Julius who is 23years old, asked him to kill and Rob her ex boyfriend of his motorcycle before they will get married.”

The police boss said, Iyabo was subsequently arrested based on the confession the suspect made.

Finally, Salami said, they will be charged to court immediately investigation is concluded. 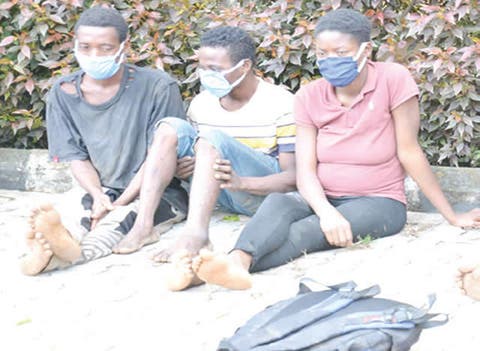