THROWBACK: An Indian Man Buried his Father with USD7600 Cash and the Controversial Photos went Viral 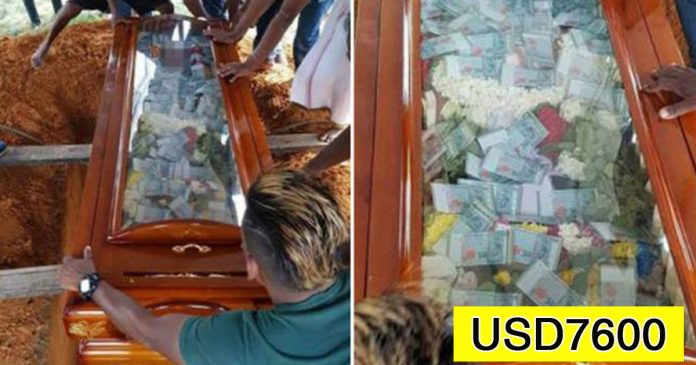 Giving the people we love their last respects when they pass away is an important sign of love and affection as family and friends prepare to let the deceased go. Burial rituals range from small scale ceremonies to huge funeral processions and it varies according to different cultures and religions.

One man from Malaysia decided to bury his deceased father in a remarkable way. The Southeast Asian country is known to have a a mix of different racial groups living together which make up the nation. Malays, Chinese and Indians make up the majority of it’s populace.

It is Chinese custom to bury the dead with paper representations of worldly objects such as property, cars, clothes and money which can be used by the deceased in the afterlife.

An Indian man in Malaysia was recorded to have done this way similarly but with more creativity, he buried his deceased father with real, cold hard cash. He topped his father’s corpse with RM30,000 (USD7600) in a glass-topped coffin and laid him to rest on January 16.

The men preparing to bury the coffin along with the cash 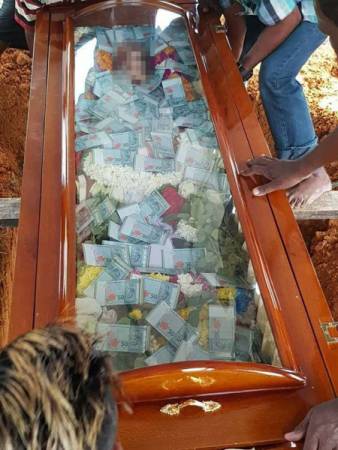 According to a report by China Press, the unnamed man had included the huge sum of money into his father’s coffin and buried the casket in Kuala Lumpur earlier this year. He did this as a sign of respect as he wanted to repay his father for everything he has done.

In this picture, the glass-topped coffin can be seen filled to the brim with RM50 ($12.83) bundles 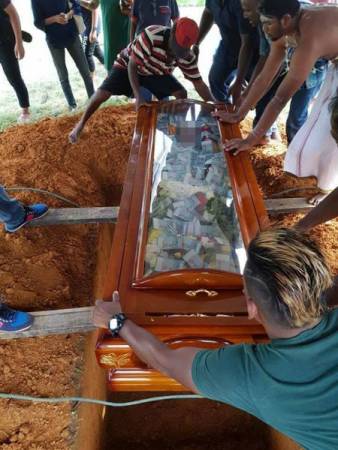 The man’s father reportedly died from suffering numerous illnesses. The funeral ceremony was held in the Southern part of Selangor.

After the photos were released and made available on social media where it spread like wildfire, netizens had a lot to say about the photos.

Some believed that it was unwise to share the photos as they thought the coffin would be dug up and the money would be stolen by nightfall. Others were skeptical about the authenticity of the bank notes as they speculated they may be counterfeit however, China Press vouched that these were in fact real notes.