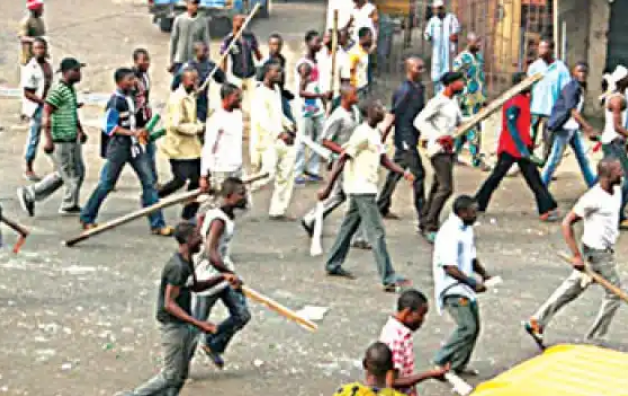 Serious clash over ticket fee by the factional groups of the National Trade Union of Road Transport Workers had led to the death of one person at Idumota in Lagos Island.

As reliably gathered that the clash between the boys of Kunle Poly and Okoro boys was triggered on whose right to issue a ticket to the motorists at Idumota motor park.

The clash that was allegedly started by 10 in the morning of Monday when Okoro boys were disallowed from issuing and collecting ticket cost from motorists by Kunle Poly boys at Idumota.

Because of the above, the thugs went wild, displaying dangerous, and they engaged each other in a street fight that led to the death of one while several others injured.

As residents and passers-by ran to safety, some traders around the park became victims as their belongings were destroyed by rampaging thugs.

According to an eye witness, he said that fight that occurred at the park was triggered by Kunle Poly boys, who allegedly prevented the Okoro from observing their one week duty at the park after their two weeks ended on Monday.

However, the Okoro resisted the intimidation of the Kunle Poly boys that allegedly led to a free fight for all. Though, one of the Okoro boys was hacked to death in the fight.

Police team from the Rapid Response Squad (RRS) have been moved to the scene of the clash to prevent further escalation and break down of laws and order in the state.

While speaking, SP Bala Elkanah the Police Public Relations Officer said that fight the fight at Idumota was between two rival groups at the park but the police have been drafted to the scene to quell it and normalcy has been returned to the park.