Nigerian Police Parade The 20-year Old Man Behind All The Killings In Akinyele, Ibadan (Video) 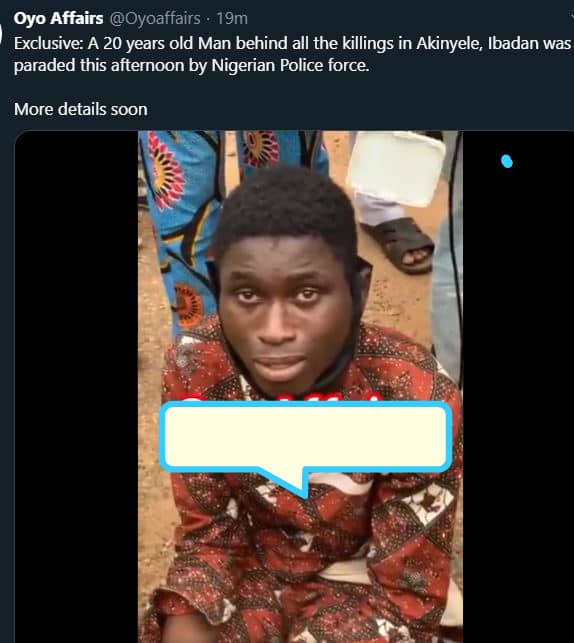 There have been several reported killings in Ibadan recently and the hand or face behind those killings was unknown.

One of the killings was sometime last month, it was gathered that the unknown figure killed Mujeeb Tirrimisiyu, a five-year-old boy with a Machete. According to report, we gathered that the young boy was macheted to death by yet-to-be-identified persons on Monday in Akinyele Local Government Area of Oyo State.

The incident was said to have occurred at the back of their house there in Tose area of Akinyele to relieve himself when the incident happened.

This incident happened on the 23rd of June while on the 24th of the same month, we gathered that another person was killed in the same community, Akinyele in Ibadan.

But this time, it was a woman.As reported, the woman was said to have been killed by by some people suspected to be ritualists around 5.am and that same day, another person was killed again in Ajibade area of Sasa community.

This repeated and similar occurrence made Nigerians and most residents of the area to call on the Police officers to investigate and bring to halt whatever that is terrorising them in that area.

Today, the update we got from that side of the country says a 20-year old man that is behind all those killings have been arrested and paraded by the Nigerian Police force.

Exclusive: A 20 years old Man behind all the killings in Akinyele, Ibadan was paraded this afternoon by Nigerian Police force.