By Vivianogonna3 (self media writer) | 1 year ago 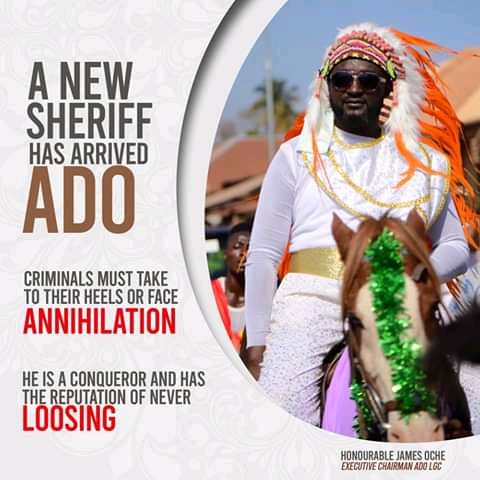 Ado Local Government Executive Chairman, James Oche has expressed shock over the discovery of Indian hemp business thriving unhindered within his domain and has said his administration will partner with the Chairman, House of Representatives Committee on Drugs and Narcotics, Hon. Dr. Francis Otta Agbo, to bring the Nigerian Drug Law Enforcement Agency (NDLEA) to Ado. Similarly, Oche has cautioned those engaged in the illicit trade to desist forthwith and surrender themselves to security operatives or face the weight of the law.

The Council Boss hinted that, a bill for the creation of a by-law that would occasion local restrictions against the cultivation, transportation, storage, marketing and consumption of Indian hemp as well as due punishment for offenders in this regard is undergoing proper attention and will soon be handed over to the legislature for consideration into passage as a by-law.

Speaking to Newsmen in Makurdi yesterday, James Oche said he was dismayed to come to the realization that, Ado played host to the largest plantations of Indian hemp, where all commercial traders of the illicit product from Benue South Senatorial District came for business. He further expressed the readiness of his administration to tackle all those involved in it and partly blamed the Indian hemp business for the crime wave within the area as it intoxicate boys with Dutch courage to engage in criminality.

Giving insights into the bill, the Ado outstanding Boss in confronting insecurity said, the bill seeks local restrictions and punishment for all those involved in the process of cultivation, transportation, storage, marketing and consumption of Indian hemp. He explained that, the bill would occasion strict penalties so as to deter intending offenders.

Oche speaking on the likely penalties for default of the by-law said, farmers of Indian hemp will loose farmlands and houses used for storage would be ransacked and house owners sanctioned accordingly, while transporters would lose the product in their possession and be arrested and vehicles conveying same will be confiscated. Those who engaged in marketing and consumption would face the wrath of the law.

Oche finally noted that the provisions of the by law would not counter the operation of the Nigerian Drug Law Enforcement Agency (NDLEA) but would advance it as, perpetrators may, if well considered be handed over to the agency for investigation and prosecution at the Federal High Court.

Content created and supplied by: Vivianogonna3 (via Opera News )

Why Do The Unknown Gunmen Love Freeing Inmates Upon Raiding Police Stations and Correctional Centers?