By PhayvourLee (self media writer) | 2 years ago

Sars officers has been attacking Nigerian youth that went out to Protest and Edo state women has decided to go spiritual about it. The women were seen praying to God over the officers that are assaulting innocent boys in the country. This took place after the hoodlums in Benin scattered the peaceful protest, the hoodlums also burnt down a police station and let go all the prisoners in the prison( oko maximum prison). Most of the prisoners that escaped came out and said what led them to the prison, they claimed that they were innocent of the charges given to them. 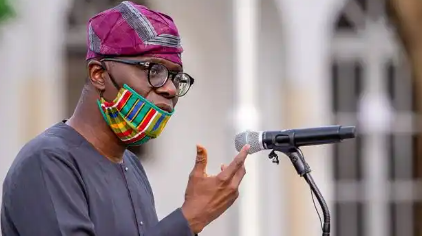 The Governor of Lagos State Sanwo-olu Babajide has imposed a 24-hour curfew on the state which will start from 4.00pm on 20th of October,2020 due to the mob and thugs that are attacking the protesters in the state.

See tweets from Sanwo-olu Babajide as stated below:

"I have watched with shock how what began as a peaceful#Endsars protest has degenerated into a monster that is threatening the well being of our society. Lives and limbs have been lost as criminals and miscreants are now hiding under the umbrella of these protests to unleash mayhem on our state.As a Governor that is alive to its responsibilities and has shown a commitment to the movement #Endsars,we will not watch and allow anarchy in our dear state."

"I therefore,hereby impose a 24- hour curfew on all parts of the state as from 4pm today 20th of October,2020. Nobody except essential service providers and first responders must be found on the street." 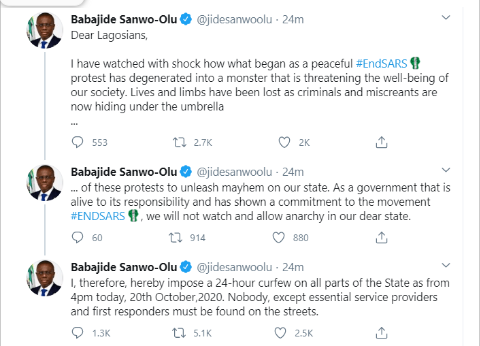 Content created and supplied by: PhayvourLee (via Opera News )