Outrage As Abuja Woman Brutalizes Maid, Locks Her Up in A Toilet For Days

By Paulsaliu1 (self media writer) | 2 years ago 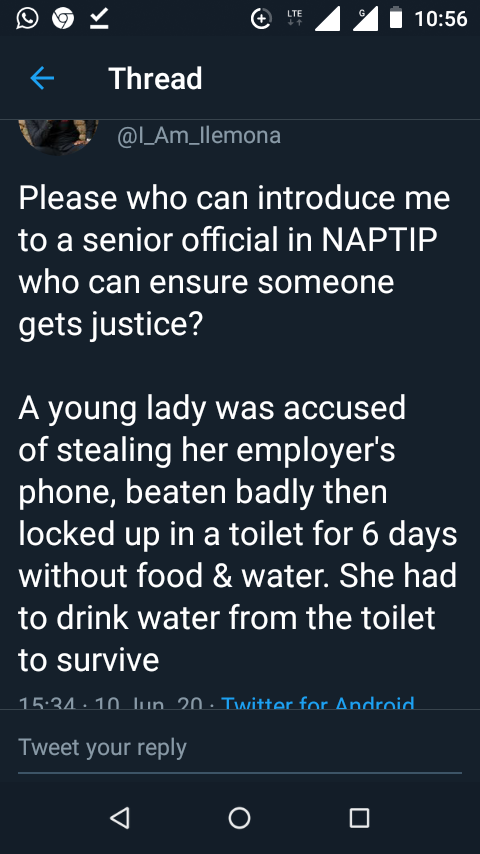 An Abuja Woman who resides at Wise 2 area alleged to have Brutalized her maid, 26 year old Happiness Dauda is being investigated by the National Agency For The Prohibition Of Trafficking In Person NAPTIP. Happiness who was locked up in the toilet for six days is battling for her life in the Wuse General hospital Abuja.

Narrating her ordeal Happiness said,her madam' brother usually visit the house and this time he had just left after his visit and the madam started asking her of her phone. She said she knew nothing about the missing phone.

The madam got angry and kept hitting her with mopping stick,wire and Mortar pistle until she became unconscious. Her boss threatened to kill her of she doesn't not confess, I had to confess under duress Happiness said.

Thereafter her boss physically brutalized her and locked her up in the toilet for six days, saying she survived with drinking her own urine. She was dumped on roadside with N1000 her madam' gave her to return to people.

Mr. Magnus the official of NAPTIP handling the case has confirmed the incident but decline to answer the whereabout of Mrs. Binta and her husband.

"I suspect the Woman and his husband is wealthy or connected and has used they influence to make sure the matter doesn't go further. If not why will @naptipnigeria grow cold over such dehumanizing act by the woman against the poor girl.

In Nigeria just do anything to escape povty"- Agala Uchenna.

"This is gross inhumanity to humanity 😩😩😩😒😒"- Daniel

Content created and supplied by: Paulsaliu1 (via Opera News )