The capital of Akwa Ibom State, Uyo has been taken over by men of the Nigerian Armed Forces following the killing of at least two EndSARS protesters allegedly by Prison guards on Thursday, October 22.

An Eyewitness said that the protesters were gathering peacefully along Barracks Road, Uyo when Prison guards conveying inmates opened fire at them.

One of the protesters, a young male in his early 20, died on the spot. Perhaps, angered by the unfortunate development, the corpse of the young man was taken to Barrack junction by Brooks street where they were blocked by heavily armed security officers.

“We were protesting peacefully as we have been doing in the past 5 days. They (Prison guards) came in their vans and opened fire at us. At that point, we ran for our safety,” and Eyewitness said.

“When I moved a distance and turned back, I saw one of us on the ground and bleeding. Before we could do anything, he died.”

FIRST REPORTS report that armed soldiers have taken over major streets of Uyo as reports have it that De Choice Mall located at Plaza by Ikot Ekpene Road is being looted. 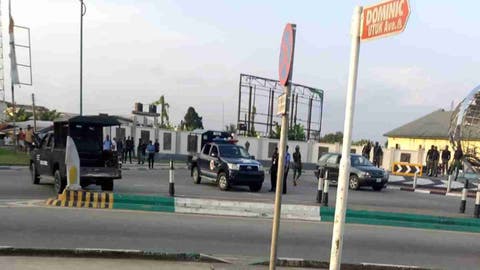 Residents have reported to our correspondent that hoodlums are robbing road users of their phones, money, and other valuables at Plaza and other major roundabouts.

“I am trekking right now from Plaza to Ikpa Road. Soldiers have blocked Ikpa Road, and no vehicle is allowed to pass.”

The State governor, Deacon Udom Emmanuel has declared curfew in the State from 9 pm, Thursday to 12 Noon noon Friday in order to restore law and order.