How My Little Boy Saved The Life Of My Husband, A Soldier Who Went To Fight In A War(Fiction)

By Dasprinter (self media writer) | 1 year ago

Being married to a soldier is an experience that is both sweet and sour. As a wife of a soldier you're proud that your husband is out there doing the world some good and saving lives, yet you would be scared for his safety. This particular time, it so happened my husband had gone to the warfront leaving me alone with our three kids. The children couldn't bear the thought of being left behind by their father especially our last child, a little boy of twelve. He cried and didn't want his father to go but nothing could be done about it. His eyes were red from crying and he ran after the train as it left carrying his father. 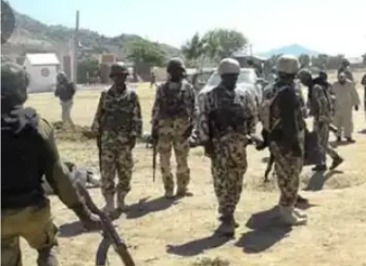 One Sunday, at church service, the priest talked on FAITH and how it could move mountains even if yours was as small as that of a mustard seed. I never knew this touched my little boy so deeply. After Mass he went to meet the priest and told him his fears concerning his father. He told the priest he has faith his father would come home alive, asking the priest if there was anything he could for his father's safety. The priest who was a Catholic priest gave him a of the seven corporal works of mercy which includes to feed the hungry, give drink to the thirsty, clothe the naked, give shelter to strangers, visit the sick, visit the imprisoned and to bury the dead.

Despite the fact that the children and I didn't show interest in the list, my little boy made sure he did all that was in the list, some of them with my help. His elder brother and sister chided him for being foolish, telling him that all those things he was doing won't bring back Daddy alive but that didn't discourage him. I cautioned them to stop disturbing him and to allow him go about his business.

Years passed and we received information that the ear has ended and the soldiers who survived were retuning. Everywhere in the house was quiet as we didn't know what to anticipate. The day came to go welcome the returning soldiers. We stood and waited, but didn't see anyone who looked like my husband. The children wept and I did too. My little boy cried the most, saying his father is not dead because he has faith. Two days later, I was told my husband has been confirmed dead. My grief knew no bounds and the children kept crying.

A week passed and I received a telephone call to come to the hospital which I was given the address, and I wondered why. On reaching there the doctor led me to a hospital bed and on looking down, I couldn't believe my eyes. Lying on the bed was my husband with bandages on his head and other parts of his body but he was alive and awake. I was shocked to the marrow. It took me seconds to recover myself and I kissed and hugged him, crying. Then he told me what had happened.

He was shot down and badly injured. Then having a better boot than his colleague who was with him at the time it happened, they exchanged boots which of course had name tags. The colleague went to get help but was shot dead. That was how their bodies was recovered and the name on the boot of the dead man was my husband's. That was how I knew. It was out little boy's faith and works of mercy that saved him. When the kids saw their father they rejoiced and tears of joy ran down their faces as they embraced him. Then my little boy said"Dad I knew you weren't dead, because our priest said if you have faith as small as that of a mustard seed, you can command a mountain to move and it will".

Content created and supplied by: Dasprinter (via Opera News )

How to uninstall any unwanted program in your pc