By Correct (self media writer) | 2 years ago 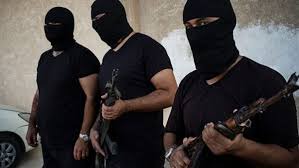 Members of the Ogun State Command of the Nigerian police have arrested three alleged assailants in the Alapako area of Obafemi/Owode local government area of the state.

Command spokesman DSP Abimbola Oyeyemi, who told reporters in a statement in Abeokuta, said the alleged assailants were arrested on Friday, 17th July 2020.

The statement said: "Suspects Uzefa Idris, Adamu Yakubu and Ayuba Buhari were arrested following a distress call received by the DPO Owode Egba police department, which stated that a Mazda bus had been violently stopped on the highway by a gang of armed robbers and that the passengers had their belongings stolen.

"After the distress call, DPO Owode Egba, SP Mathew Ediae, led his anti-robbery team to the scene. When the police officers were seen, the thieves set off but were chased into the bush where three of them were arrested.

He added that "the two victims of their operation Oluwakemi Oyegade, who was robbed of N545,000 (five hundred and forty five thousand) Naira and a telephone, and the driver Zacheaus Olaniyi were rescued and they are at the station.

"The two victims said that the Robbers jumped from the bush onto the road and forcibly stopped the vehicle, starting to beat them with matches before stripping them of their valuables.

From the arrested robbers, the sum N99,700 (ninety nine thousand, seven hundred naira) and an itel phone were among those seized.

State Police Chief Kenneth Ebrimson has ordered the immediate transfer of the suspects to the Special Anti-robbery Squads (SARS) for discreet investigation and prosecution.

Content created and supplied by: Correct (via Opera News )