Check Out How a British Man Got a Selfie From a Suicide Bomber on a Plane.

Back in the year 2016, Ben Innes,a British 26 years old man boarded a plane enroute to Cyprus from Egypt. While everything seemed to be calm, the plane was suddenly hijacked by Seif Eldin Mustafa,an Egyptian man.

He was putting on something that looked like a suicide bomb vest and he threatened to blow up the plane.

Ben Innes who works with an oil company's risk assessment,hazard recognition and behavior based safety department thought it would be a great opportunity to seize the moment and get the world's greatest selfie. Many believed his professional background helped him to recognize the explosive was fake. 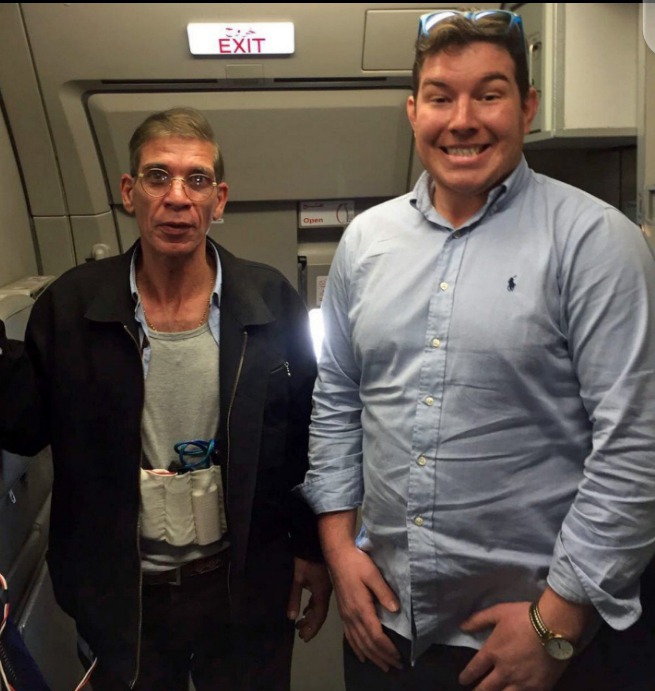 Later on,an EAngyptian airplane stewardess also joined in for a selfie as well. While interviewing Ben,he said he feels his action was worth it. If he was going to die,he might as well go out while having a bit of fun.

In his words,“I’m not sure why I did it, I just threw caution to the wind while trying to stay cheerful in the face of adversity. I figured if his bomb was real I’d nothing to lose anyway, so took a chance to get a closer look at it.

“I got one of the cabin crew to translate for me and asked him if I could do a selfie with him. He just shrugged OK, so I stood by him and smiled for the camera while a stewardess did the snap. It has to be the best selfie ever.”

Luckily for the passengers and the crew, the bomb vest was fake and no one was harmed in the process

Seif Eldin Mustafa later turned himself in to the police and he's now serving a life jail term in an Egyptian prison. It was indeed a daring moment for Ben.