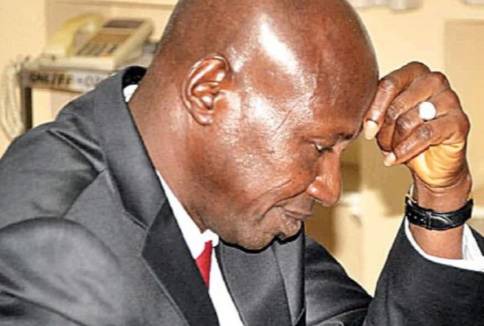 The suspended EFCC president, Ibrahim Magu, reportedly escaped further arrest on Thursday 16 July after he decided to stay at the official residence of the EFCC president despite his suspension and replacement.

After his release, Magu went to the official residence of the EFCC President in Maitama, where he spent the night.

His decision to return to the residence and the orders Magu allegedly gave to the officials guarding the place were considered an affront to the authorities, as he had been suspended from his post and a replacement appointed.

Magu reportedly felt that he should be arrested again on Thursday morning, 17 July, for his indiscretion, and quickly moved from the Maitama residence to his personal home in Karu.

Regarding Magu's planned re-arrest and the question of whether police officers guarding the former head of the EFCC were removed by police authorities, his lawyer Wahab Shittu said;

"Let me see if I understand: His security details were removed, but they were restored," said Shittu.

In response to concerns expressed by the People's Democratic Party (PDP) following his (Shittu's) claim that the investigation panel led by Judge Salami would exonerate his client and reinstate him, Shittu said he did not want to make a "political backlash.

Magu was held at the Force's Criminal Investigation Department in Garki Area 10 in Abuja from Monday, July 6 to Wednesday, July 15, when he was stopped by a combined team of mobile police and Department of State Services (DSS) employees who were involved in traffic at Wuse II until Wednesday, July 15.

Magu was released on bail from police custody on the night of Wednesday, July 15, after spending nine days in custody by order of the Presidential Committee headed by Judge Ayo Salami.