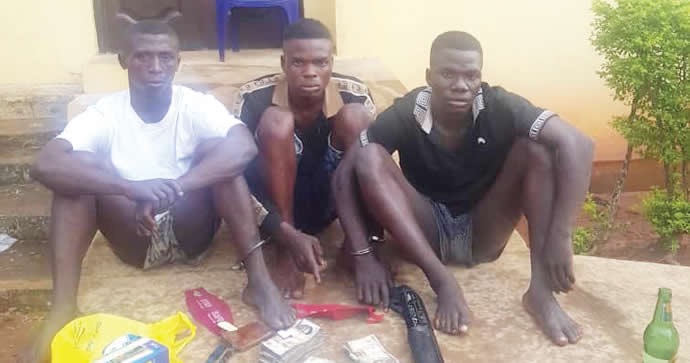 The suspects have repeatedly been terrorising people in the Ekwusigo Local Government Area of the state for some years.

Haruna Mohammed, the Police Public Relations Officer in the state, who confirmed the arrest, said the suspects were arrested following actionable intelligence by the command’s Special Anti-Robbery Squad. He said the suspects had on July 11, around 6.15am at Umuibu village, Akwu Ukwu, allegedly robbed one Emmanuel Obi at gunpoint and dispossessed him of N700,000, €8,000, $3,000 and some phones.

The PPRO further stated that the suspects will be brought to justice upon the conclusion of investigations.

He also added that firearms, ammunition and other incriminating items which included one pump action gun, one fabricated gun, four live cartridges, N610,000, €4,600, $600, one shuttle bus newly purchased with the victim’s money, two new tricycles and three phones stolen from the victim, were recovered following their arrest.

Mohammed therefore used the medium to advise other hoodlums out there to change their ways, as he is bent on fetching them out on by one. He assured them that they will all be made to face hell in jail for all crimes committed.