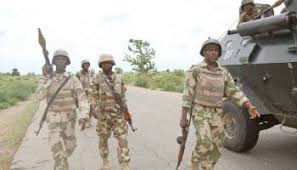 Image source from allnaijamedia.com. Image credit goes to its owner.

An attack on the Nigerian Military Special Forces in Kastina State has left 18 dead, which included one Major, one lieutenant and 16 soldiers.

From reliable sources it was said that the attack was carried out by heavily armed bandits who were on a mission to rescue their abducted notorious bandit leader known as 'Dangote'.

The Situation Report on the incident was obtained by PRNigeria on Sunday.

The report said they were “ambushed by armed bandits while on advance to notorious bandit leader’s camp known as Dangote at Shimfida in Jibia LGA”.

The bandits engaged the soldiers on foot while advancing down a hill.

It noted that troops involved were of the Special Army Super Camp (SASC) 4.

The images taken are to gory to be posted as they contain graphic content. But you can check it out on the internet but remember viewers discretion is advised.

Injured troops in the ordeal are receiving medical attention.

The attack happened hours after the bomb explosion in Yammama village near Malumfashi, Katsina.

The explosion left five children dead and several others injured.

It's a bother to see people getting attack by armed men especially during this pandemic.

Let's hear your comments below on this article