By Nazarene (self media writer) | 1 year ago 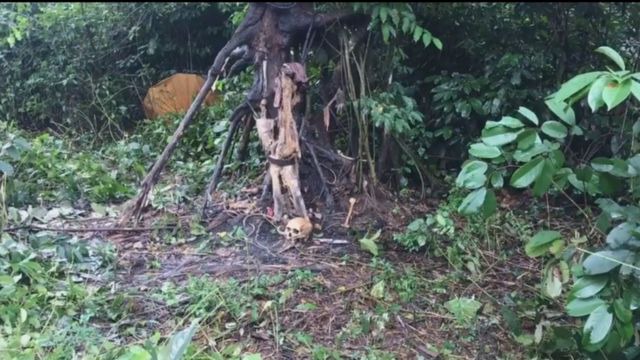 The Police has recovered the rotting skeleton of one 38 year old kidnap victim, from a thick bush in Rivers State, southern Nigeria.

Rivers State Police Command identified the victim as Ereba Gospel Dinabari, after they discovered his dead body in Alesa, Eleme Local Goment Area (a town around 20 kilometers east of Port Harcourt) on yesterday.

The Police spokesman Nnamdi Omoni, who took reporters and media to the bush where the carcass of Dinabari is, disclosed that operatives of the Anti Kidnapping Unit (of Rivers State Police Command) during the investigation of the kidnapping, arrested two suspects, 25 year old Osondu Uchendu and 23 year old Amebulem Amos in Alesa Eleme and these suspects showed them where the dead body is.

According to police, one of the main suspects Osondu Uchendu led the policemen and reporters to the Alesa bush where he confessed that he and his gang tief Dinabari to a tree till he died.

Uchendu confessed that they kidnap Dinabari in Woji, Port Harcourt and demanded One million naira ransom. But after his family paid the ransom, they did not release the victim but killed him in the bush.

The Police spokesperson Nnamdi Omoni, said the suspects shall be charged to court after their investigation has been concluded. The Police also recovered a Toyota Camry car (Spider) which belongs to the victim from the suspects, who also confessed they have kidnapped quite a lot of people around Woji, Abuloma, Peter Odili Road in Port Harcourt and also in the Eleme communities.

This is not the first time such crime is happening in the area.

Recently, the police exhumed three dead body of students of University of Port Harcourt and Rivers State University from ETEO bush in Eleme, where kidnappers had also buried them.

Residents of this area begged the government to help look into the case of kidnapping and insecurity in this locality.