When will this stop in Nigeria ? Look at what this couple do to this 12 years old girl 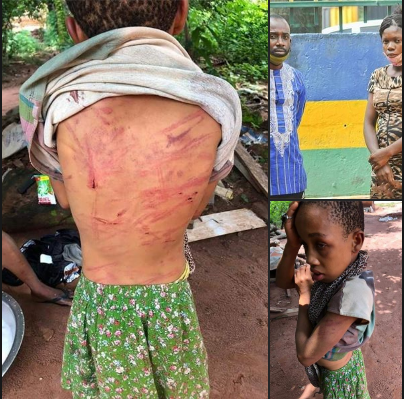 The Enugu State Police Command has arrested one Effiok Umo and his wife, Nnenna Umo, both of Okwojo Ngwo, Udi LGA, for allegedly abusing and assaulting their twelve (12) years old daughter, Mercy Umo.

Speaking to newsmen shortly after the arrest, the police spokesperson, Daniel Ndukwe Ekea says "the arrest is sequel to information received by the Commissioner of Police,Ahmad AbdurRahman from National Human Rights Commission, Enugu on 12/07/2020 and his consequent directive to the Divisional Police Officer, 9th Mile Police Station, to ensure the suspects are arrested and prosecuted accordingly"

According to Ndukwe, the Commissioner of Police who frowned at the increased occurrence of acts of child abuse, vowed to prosecute the suspects to serve as deterrent to parents/guardians, who intend or have been committing such inhuman acts that infringes upon the personality and Fundamental Human Rights of children, especially susceptible ones.

He further stated that , "preliminary investigation shows that the couple are used to abusing and assaulting the child for little or no justifiable reasons by using objects, such as sticks, electric wires, heels of shoes and so on to mercilessly flog, hit and/or beat her up. The height of it happened on 10/07/2020 at about 10:30 when the wife, who is the child's stepmother, abused and assaulted her to the extent of inflicting her bodily harm on the excuse that she dozed off while slicing onions required for food being prepared the said night. This led to neighbours, who have found their act of inhuman treatment of the child unbearable, reporting the matter to the Police through National Human Rights Commission"

Warning for ladies when you want divorce please take your child when the child grow up and made it in life let him/her go back to his/her fathers house some women normally develop hatred on a child that is not their own especially when it come to stepmother. Look at what a poor girl passing through if anybody try this with my child both of us will appear for tv and newspaper.

what on earth would make someone sleep off while slicing onions, I mean onions that do make people to cry while slicing it, its simply means that the girl has been lacking sleep for a very long time.

I think hell fire is really empty because all the demons are present here on Earth in form of humans.