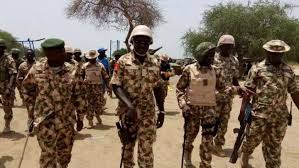 Acting Director of Media Operations General Defense Bernard Onyeuko said in a statement on Friday in Gusau that military operations took place between July 14 and 17.

He also said that AK 47 rifles and 21 motorbikes were found from bandits, which were immediately destroyed.

A military spokesman said troops faced bandits on July 15 while cleaning up suspected bandits in the villages of Garin Maza, Tamuske and Garin Bagwari in Sabon Birni, LGA Sokoto.

"This leads to the killing of three bandits and the recovery of six motorbikes that were destroyed along with their hideouts," the spokesman said.

He said while Bingi responded to a credible intelligence agent and stationed troops at the base for advanced operations, he arrested five suspected bandits who tried to sell 17 cows and a goat to Zamfara at the Bingi market in LGA Maru.

Onyuko noted that preliminary investigations revealed that the animals had previously rustled from the village of Gabia.

He also said that troops stationed at the Danjibga base in Tsafe surrendered 121 cows and 37 sheep from the noise of the Disturbed Animal Recovery Committee to LGA Zamfara for necessary action.

He confirmed the arrest of a bandit informant at the Isa-Matete junction in the Isa LGA district in Sokoto State, which is currently assisting the investigation.