By O.Emesiri (self media writer) | 2 years ago Chioma, My Neighbors younger sister was in Lagos with her elder sister before she came to warri to stay with her sister, to finish her secondary school education, I bear personal testimony to the truth of what I am now about to relate,a true life story that will linger in your mind for a long time. we were neighbor until this incident happened to chioma, I want to narrate it to the public, because it helped my Christian beliefs and my trust in God to be so strong, and I know it will help many out there to strengthen their Christian life also. God is all-seeing, all powerful, and in control of the human affairs. He is not blind that he can not see. ; His hands are not too short that he can not save. Chioma and her sisters were not too strong to be called good Christians; I have known chioma’s sister who was married to Mr. Eze, of Niger cat, we have lived long enough to bear personal testimonies to the truth of their Christian life, Mr. Eze who I was acquainted with was not a Christian, nor does he go to church.

Chioma shall be the only prominent character in this true life narrative. Chioma got to the end of secondary school, here in warri, but went to Lagos to write her WAEC examination and came back to warri to continue her stay and to help with house works for her sister Mrs. Eze. Chioma was a very respectful girl, always smiling, she and her sister Mrs. Eze was very fond of each other, that was the very reason she came to warri to stay with her. The WAEC result was out and the sister in Lagos sent for chioma to come and check her result. All preparations were made for her journey. Chioma left warri on Monday for Lagos, she arrived Lagos quite alright, got down from the warri vehicle. and she went into a taxi park to take a taxi down to her sister’s place. The taxi she boarded, had 3 passengers already, one in the front passengers, and two at the back seat of the taxi, the taxi driver saddled chioma at the middle of the two back passengers. The driver was polite enough to announce to them that he will buy petrol at the next filling station, chioma said the front passenger answered okay, she said nothing, the next thing she noticed the man began to sleep, she was puzzled and could not understand the sleep was deep, but she only said to herself maybe he is too tired from the day’s job,

The driver pulled into the station, after fueling, the driver zoomed off, into another direction. He faced Lagos express way towards Ibadan, she wanted the man in the front seat to say something but he was fast asleep, she now said,driver, where are you taking us to? Then the two men at the back now pulled her down, almost sitting on her, while the driver maintain a good speed. 15 min drive into the journey the two back passengers pulled the head of the man sitting in the front seat, backwards, and the other man did the cutting away of the man’s head in the front seat, they were all stained with blood, the driver slowed down, opened the door of the passenger and pushed his body out of the taxi, onto the road, and zoomed off with the head. Fear ran through my whole body, to the very foundation of my being. the more she think of the horror that will before her the more she feared, and her body began to shake uncontrollable, she said the journey looked like it will never end, but it suddenly came to an end the driver drove into a very big compound, properly fenced, the gate opened, on hearing the horn of the taxi. They took her out and lead her into a room in a house that had a very long corridor with many single rooms, with good padlocks on them, she could hear human voices in some of the rooms, until she was introduced into her own room, where two girls were already,occupying, all half naked. She was locked inside,with the girls. The windows were tinted from the outside, the people inside cannot see the people outside, but the people outside can see the people inside- with that she could not tell what time of the day it could be. 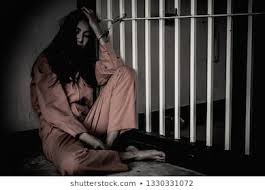 A day passed the sister in Lagos called warri to enquire why chioma has not come to Lagos? , they told sister that, chioma left warri a day before , this speaked fear into the people in Lagos, and we here in warri, prayers intersection began,night vigil was held for God to intervene in her safety . The next day of Chioma in captivity, people of all kinds came for inspections on the girls, and left, after some hours, they came back to the room and took away one of the girls, and she never returned to the room. Now remaining two, Chioma and the other were not talking to each other, both of them in fear, not even able to pray for themselves, but here in warri prayers went on day and night, Lagos was praying also. On the fourth day, without food or water another buyer came to inspect his market and left, the room locked , and some men came back and took away the second Girl from the room, chioma was alone, she has lost all senses not what to do, but suddenly she realized that she had to help herself escape. But how? she made for the door, but it was locked from the outside. Chioma, now in need of escape, she looked up to God. In a very loud voice she prayed this prayer from the heart of need . LORD you said we should call upon you in time of trouble,Lord help me. LORD I am the product of your factory. The room changed, and Chioma stood with fear, she couldn’t understand, suddenly she began speaking in tongues and could not control herself anymore, but in Chioma’s mind she was making noise that can attract captors to come to her room, so she wanted to stop but she could not stop speaking in tongues, she heard a voice that asked her to go out of the room, she couldn’t move because she couldn't understand, the voice repeated again move now, so she ran to the door, and turned the handle, the door opened, she closed it back, the voice said move, so she came outside, all the sound that was coming out of Chioma was heavenly language, she could not talk normal talking, the outside was very bright, she wanted to run back into the room, but the Lord, shut the door himself.

so she could not enter back into the room. She had to find her way out of the compound, not knowing the compound as it were, so she headed for the gate, the gate was locked, she ran back so that the people may not see her, the LORD directed her to the back of the compound, but it was fenced high, as she wanted to rest on the wall, the wall fell down, and she passed through the broken wall into a huge forest, she began to run for her dear life, deep into the forest, until night came she was in the forest until she began to see light in some houses in the forest, so she ran towards the light, and the people she met could not speak English, and she cannot speak Yoruba language, she ran through out the night to unknown directions, until she came to a place where she was on a very high hill, from where she saw the road fare below, and no way to climb down, impossible for her to get to the from her standing point, and she could not go back for fear if the captors may be following her. Chioma has spent six days in the event without food or water. At this point, Chioma was alone, to take a decision, she choose to die,instead of her captors to catch up with her. She let herself fall from the hill intending to die. She let herself go. As she was falling down the stones were like foam on her body, until she got to the bottom of the hill. she did not sustain any injuries or broke a bone, or hurt her skull, she landed by the side of the road, she stood up full of tears and strength. Every were was silent it was still dark. She did not know the direction to go, she faced one direction, and began to work along the road until it was down, she had gone for days without food and water. She met police check point, who told her she was in Ijebuode express road. The police brought chioma back home.

She found a good man who took her hand in marriage during her testimony in the church, God is all we need to trust in in our lives. Her parent were not there, her friends were not there. God was with her. God sees all that happens to us. Call him always in every matter.

Bless you all, even for the time you spent with me. Bye for now.

Content created and supplied by: O.Emesiri (via Opera News )