By Mj_Sekani (self media writer) | 2 years ago 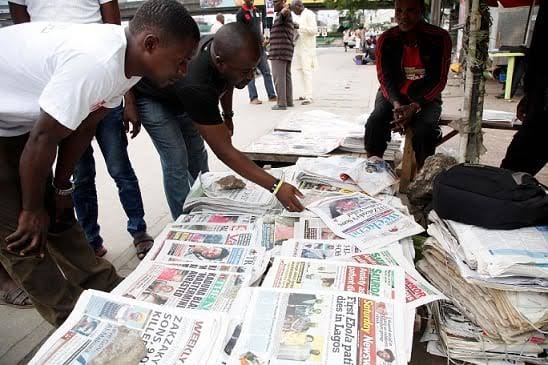 Good morning Nigeria,welcome to the roundup of newspaper headlines in Nigeria for today Thursday,16th July 2020

The suspended Chairman of the Economic and Financial Crimes Commision (EFCC), Mr Ibrahim Magu, Wednesday regained his freedom after 10 days in Police custody.

Magu was arrested by security operatives at the Abuja Zonal office of the commision on his way to a meeting last week Monday. He was compelled to respond to an invitation to appear before the Justice Ayo Salami-led presidential panel probing the activities of the commision and alleged infractions.

The official Twitter accounts of Apple, Elon Musk, Jeff Bezos and others were hijacked on Wednesday by scammers trying to dupe people into sending cryptocurrency bitcoin, in a massive hack of the social media platform.

Posts, which were largely deleted, were fired off from the array of high-profile accounts telling people they had 30 minutes to send $1,000 in bitcoin in order to be sent back twice as much.

The Federal High Court in Abuja on Wednesday declined to issue an order of interim injunction to stop Senate screening and subsequent inauguration of 11 candidates whose names were forwarded to the Senate for confirmation as judges of the High Court of the Federal Capital Territory, Abuja.

Justice Inyang Ekwo, in a ruling on an ex parte application filed on July 8 by the plaintiff, Oladimeji Ekengba, an Abuja-based lawyer, said the court could not make such orders in the absence of the defendants.

The defendants are the President, Major General Muhammadu Buhari (retd.), the Attorney General of the Federation, Mr Abubakar Malami, the Clerk of the National Assembly, Mohammed Sani-Omolori, the Chief Justice of Nigeria, Justice Tanko Muhammad, and the National Judicial Council.

Justice Ekwo said upon examining the ex parte application, the “prayers cannot be granted in the absence of the defemdants.”

He ordered that the suit and other processes filed by the plaintiff be served on the defendants and subsequently adjourned till July 21.

Investigations showed that six South-West states, Ebonyi and Cross River states had started preparing to recall their pupils in preparation for the examination.

The agro-allied business venture was birthed to augment various government efforts in diversifying the Nigerian economy through agriculture and its secondary businesses. So far, the outfit has branches in Nigeria, Israel, and the United Kingdom.

Elaborating the concept of the business model, the singer revealed the primary goals in an online interaction with the Nigerian Stock Exchange (NSE) Chief Executive Officer, Oscar Onyema, at the virtual ringing of the gong to close the market on Monday, July 13, 2020.

MTN Nigeria Plc (MTN) has announced the trial of e-SIM services on its network based on approvals received from the Federal Government. The trial which kicked-off on Wednesday will run for one year and is open on a first come first served basis to a limited number of subscribers who own compatible devices, a statement from MTN said.

Chief Operating Officer, MTN Nigeria, Mazen Mroue said the company was eager to get through the trial process so that the technology can be deployed for the benefit of every Nigerian. “We are in a fast-paced digital age with new technological advancements driving the constantly changing landscape. Against this backdrop, customers depend on us to provide high quality, reliable and easy-to-use connectivity solutions.

“With the introduction of the e-SIM, we will offer customers a seamless and distinctive digital experience with new levels of flexibility, simplicity and convenience.

Mr. Femi Adesina, Special Adviser on Media and Publicity to the President, has said the presidential panel investigating Ibrahim Magu, the suspended Acting Chairman of Economic and Financial Crimes Commission, EFCC, might have detained him to ensure relevant documents were not tampered with.

Adesina said this on Channels TV programme, ‘Politics Today’, just as Magu’s lawyer, Mr. Tosin Ojaomo, stated on the same programme that if the Justice Ayo Salami panel eventually finds Mr. Magu not culpable, he should be reinstated by President Muhammadu Buhari.

Meanwhile, according to Adesina, although he is not a lawyer to determine if the panel was justified in detaining Magu for 10 days, it may have taken measures to ensure that relevant documents needed in connection with the investigations were not tampered with.

THE hope and future of Nigeria have not been so dampened by corruption as orchestrated by economic and financial crimes as we are witnessing now within and outside the country. The Economic and Financial Crimes Commission, EFCC, was established in 2003 by President Olusegun Obasanjo’s administration through the National Assembly Act 2004 as amended.

Prior to the establishment of the EFCC, the Police had long been in existence with a mandate covering investigation of money laundering offences. Suffice to say that the failure of the Nigeria Police in its mandate for whatever reason brought about the national embarrassment of listing Nigeria among the 23 non-cooperating countries in the international fight against money laundering. In other words, Nigeria was one of the safest havens for money laundering and launderers.

THE Kano State House of Assembly has begun a process to review the State’s Penal Code amendment (No.12), law of 2014, to provide for castration as punishment for rapists in the state.

The House took the decision following a motion presented on Wednesday by a member representing Rano State Constituency, Nuraddeen Alhassan, seeking for the review of the law.

Plenary was presided over by the Speaker, Alhaji Abdulazeez Gafasa, and the Assembly men were unanimous in the decision.

Alhassan, who called for the review of the law to further reflect a harsher punishment for rapists in the state, said the present 14-year jail term was not enough as punishment.

“I am calling on the House to recall the law and amend it, to provide castration as punishment for rapists. I believe this is the only measure to be taken to end the rampant cases of rape in our society, as it is so worrisome.