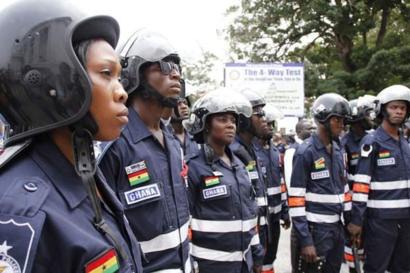 A 27 year old Nigerian man was murdered on Saturday morning by the police in Ghana for displaying a frenzy action in a community in Gomoa, Ghana. The man was shot by a policeman as they tried to control is wild display of madness in the area.

This incident happened in a community Gomoa, Central Region of Ghana, on Saturday morning. Following the death of the man, some of his Nigerian friends and family in the area motivated other youths to join them in protest for unlawfully killing their friend. They stormed the police station at Liberian Camp near Kasoa and started shouting and flinging stones and empty cans, saying that the police intentionally killed the man.

According to the police spokesperson, he said that the deceased, Precious Watta Billions was armed with two machetes and was wielding it violently threatening to kill anyone who comes his way. The police were contacted and they ordered the man to drop his weapon but he refused and was heading towards their side before one of the police shot him as a means of self defense.

Friends of Precious arrived the scene and were heartbroken after seeing the gunshot wound inflicted on him by the police. His friends mourned his death as they revealed that Precious Watta was having a mental problems. This stirred the people as they protest the unjust killing of their friend.