A viral video on social media showed that a man drove his car into a police barricade in Seattle's Capitol Hill area. As per the reports he also fired a gunshot and injured one person.

The video of the incident in Seattle shows that the protesters rushing toward his car and hitting it. Soon, the man inside the vehicle appears to fire a gun out of the window and then exits the vehicle with gun drawn as protesters scatter. However, local police have arrested the shooter. 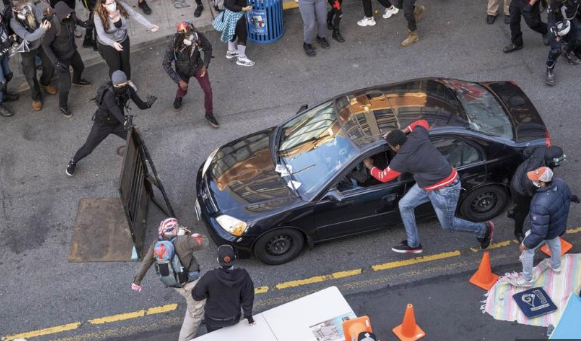 After the incident, the fire department of Seattle confirmed that one person was shot at the intersection of 11th Avenue and Pine St, where the incident took place Sunday evening. It was also reported that a 27-year-old male victim had been taken to hospital as he sustained injuries and now in a stable condition.

A right-wing terrorist drove into a crowd and shot at least one protestor in Seattle. (ðŸ“¹@SpookeeACAB) #BlackLivesMatter pic.twitter.com/fJUsi7VW3S

Journalist Alex Garland posted a video talking to the victim who said that he tried to disarm the shooter. As the medics were dressing the gunshot wound, the victim told Garland, "My whole thing was to protect those people."

Story unclear at the moment but young man shot on 11th and Pine. Daniel, 26, wanted to tell his story. With the help of other medics I got a tourniquet on his arm. Street medics were on the spot with gauze and pressure. He walked off the scene. pic.twitter.com/g9Ism58YkF

As per the local police officers, they recovered a gun after they arrested the shooting suspect. Less than an hour earlier, Mayor Jenny Durkan announced that there would be fewer police officers at this location.

Suspect in custody, gun recovered after man drove vehicle into crowd at 11th and Pine. Seattle Fire transported victim to hospital. Officers searched, but do not believe there are any additional victims. Will provide updates when available.

Since the first day of the nationwide protest movement in the country, peaceful demonstrations turned into violence and destruction. Ever since a white police officer killed African American George Floyd in Minneapolis on Memorial Day, Atlanta and Louisville witnessed people clash with police, damaging buildings and setting cars on fire.

In New York, Los Angeles, and Washington, people noticed looting incidents in the midst of peaceful demonstrations. Recent social media posts showed that vandals have damaged historic monuments around the country amid protests. The people who deliberately wanted to turn a peaceful day into a shameful one, have targeted Lincoln Memorial, the World War II Memorial and the statue of Gen. Casimir Pulaski on the National Mall in Washington.

In Boston, the Robert Gould Shaw and the 54th Regiment Memorial was one of 16 public artworks damaged when thousands of protesters came together for a peaceful protest.

A few days ago, Indianapolis police said two people have died after several shootings took place during downtown violence but police denied any involvement. The officers mentioned that there was a small group of people that escalated to violent acts, which included "throwing projectiles at officers and breaking windows of government buildings. Since then, we have seen continued and escalating incidents of violence. This includes shots fired and loss of life."

However, Indianapolis officers also revealed that there were some people who did not have the intention to carry out a peaceful protest like others but to trigger a riot.