Remember the British woman who gave birth to rabbits:here is the true story.

Remember the woman who gave birth to rabbits:here is the story.

Mary Toft was an English woman from godalming.In 1726,she became a subject controversy when she tricked almost all the doctors in believing she had given birth to rabbits.This prompted the arrival of john howard who investigated the matter.He then told many prominent physicians of what happened,it then brought the attention to the surgeon of king George I royal house hold, Nathaniel 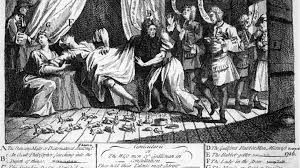 Nathaniel concluded that Mary's case was real and true,but the king also sent surgeon cyriacus.Mary had given birth to many rabbits. When john Howard the local surgeon came,he him self witnessed it,not only did she give birth to dead rabbits but she also gave birth to a leg of a cat and other dead parts.Am sure you want to know how,am already getting to the part of how she was able to give birth to such animal parts.Mary became ill many times and over the next few days she delivered more pieces of rabbit.

When the story became much popular and had spread,on 4 November henry davenant,a member of the court of king George went to see her himself to know what was happening.He examined the samples Howard had collected and returned back home as a believer.Howard had Toft moved to Guilford and help her deliver to clear the doubt of everyone.He then wrote a letter to davenant which was how it brought the attention to Nathaniel a surgeon to the kings house hold.

By the middle of November, the British family were very interested to see Mary give birth so they sent st Andre and Samuel molyneux a secretary to the Prince of Wales to investigate the case. 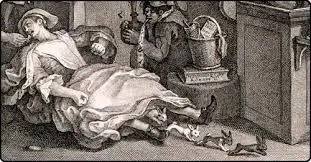 They weren't disappointed when they arrived on November 15 to see Mary who gave birth to rabbits torso within the hours they came.St Andre then checked if the lungs had breathed air by putting it on water and it had and then conducted a medical examination on Mary and concluded that the rabbits where bred in her fallopian tubes.

The king who was fascinated then sent surgeon cyracus who came but she did not delivered so he suspected that it was a hoax(lying).He also noticed that Mary bent her knees together in other for something not to fall.Cyriacus knew that every thing was a hoax as they won't let him deliver her so he lied that he had believed,went back to London took some specimens and examined it and noticed That the rabbit had been altered and began to suspect.The King than orders that Howard bring Mary Toft to London for further investigation.Under cyriacus strict control,she was studied by many physicians.This became one of the biggest hoax(deceit) in history

It was later on December 4 that Thomas onslow and 2nd Baron onslow decided to commence an investigation on his own and then discovered that Mary Toft's husband had been buying young rabbits,when Barron was convinced that he had enough evidence to proceed,he wrote that the case had alarmed England and that he would publish his finding.The same day Thomas Howard confessed to the chief justice of peace that he had been bribed by Mary's younger sister too be secretly carrying rabbits to the house.When arrested,Mary denied him and Margret stated that she bought the rabbit only for eating.Douglas who was the also a surgeon threatened to perform a painful surgery on Mary.

On 7 December in the presence of maningham,Douglas Mary finally confessed that following her miscarriage, an accomplice inserted into her womb the claws and body of a cat,she also said that for later of her parturition,animals were secretary inserted into her vagina. 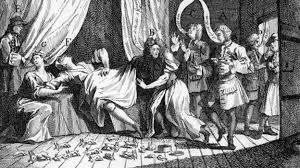 Pressured again by Douglas,she confessed more on 8 and 9 of December before been charged in statute of Edward the III as a vile,cheat and imposter.While taken to court, she confessed that she saw a travelling woman on the road who told her how to insert the rabbits into her womb.On 1727 April 7 she was discharged and moved on with her life. She later gave birth to a daughter.Little is known about Mary's later life, she later reappeared in 1740 when she was arrested for receiving stolen goods.She died in 1763 and her obituary was put in London news papers along aristocrats.