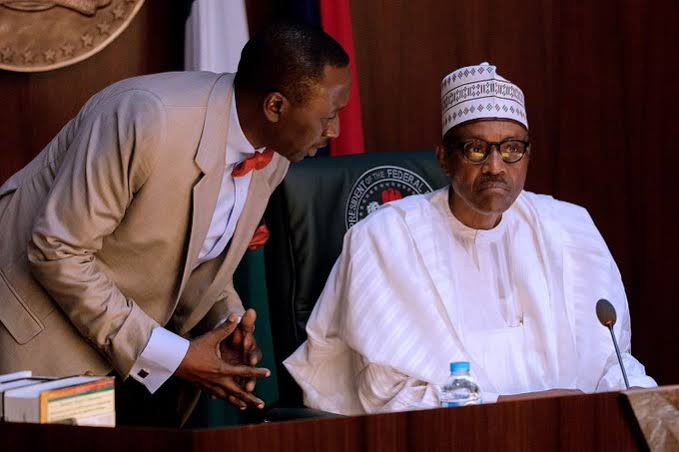 The bandits stormed the community and started breaking into people’s houses shooting sporadically into the air.

These bandits are fearless. May God help Nigerians.

President Buhari hailed him as a tireless worker and strong pillar of his administration while wishing him well.

Adamu Balarabe writes on the allegations against the North East Development Commission (NEDC).

The writer says the allegations against the NEDC are targeted at Sadiya Farouq.

The group in Abuja, on Sunday, July 19, also alleged that there were threats to the life of the AGF.

According to the group, the AGF has shown so much commitment in safeguarding Nigeria's judicial system.

By Tobias Lengnan Dapam The Nigerian Military said its troops of Operation Lafiya Dole, on 17 July 20, killed a top Boko Haram Commander, Sayinna and several others along Nigeria/Cameroon border. The military in a statement issued on Sunday, by Major General John Enenche, Coordinator, Defence Media Operations, Defence Headquarters, listed some of the slayed terrorists suspects to include; Imam, Mansur and Abu Fatima who hibernate in Sambisa forest.

Operative of the Ogun State Police Command have arrested three suspected highway robbers at Alapako area along Lagos-Ibadan Expressway. According to the spokesman of the Command, DSP Abimbola Oyeyemi, the suspected robbers were arrested on July 17, 2020. The suspects: Uzefa Idris, Adamu Yakubu and Ayuba Buhari, were arrested following a distress call received by the Divisional Police Officer of of Owode Egba Division, SP Mathew Ediae, that a Mazda bus has been forcefully stopped on the highway by a gang of armed robbers and the occupants are being dispossessed of their belongings.

A Nigerian man is seeking justice after his daughter died with her unborn set of twins at the Federal Medical Centre Idi-Aba, Abeokuta.

Babajide Olayemi says his daughter died as a result of negligence on the part of the health workers.

As the country joins the global community to mark the 2020 Nelson Mandela Day, the National Human Rights Commission, NHRC, has urged the government, Private enterprises and Civil Society Organizatios to do more in ensuring equality and social justice for everyone, especially at this critical time of COVID-19 pandemic. The Executive Secretary of the Commission, Tony Ojukwu, in a statement on Sunday, said Nigerians should make renewed commitment to uphold legacies left behind by the human Rights defender and freedom fighter, Nelson Mandela, who he noted worked throughout his lifetime for the promotion and protection of human rights.