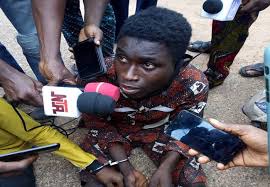 Sunday Shodipe, was arrested by the Oyo state police command, for the rape and murder of 18 year old undergraduates student, named Bello Barakat and many other people in Oyo state. Miss Bello Barakat, who was killed on the 1/6/2020, at Oloro Area of Akinyele. 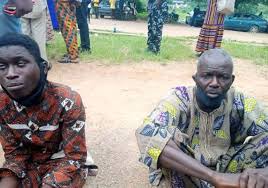 The killing of these innocent individuals make the police to investigate their death and Sunday Shodipe was found responsible to all this atrocities. He explained, how he goes about his killings, that a harbalist named Adedokun Yinusa aged 50 year old, is the one sending him to go and killed people. 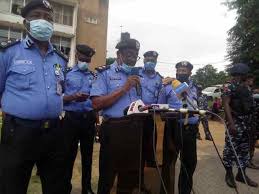 That before he go on any assassination assignment, the herbalist will ask him to kneel down and make some incantation on him, put something in his tongue three times, before he will go and killed people for the herbalist. Sunday Shodipe said that, whenever he sees his victims, he usually hit them with shovel, when the fall on the ground with blood all over them, he will then move around them three times making some incantations, after which he will placed the body on his back for five minutes before moving from the crime scene. When ask if he is not afraid,if someone will not come and see him while putting the body on his back, he said no the herbalist has assured him that nobody will come around that time, when asked the reason behind his killings he said that he did not know, that it is the herbalist, that send him. Meanwhile the accused herbalist has denied sending Sunday Shodipe on such errant. The phoes of the victims were recovered from Sunday Shodipe and the police has promise that the must face the wrath of the law.