A promising young man named Izu has reportedly taken his own life after being accused of rape by a close female friend.

The late boy was a fashion designer and entrepreneur, whose brand " Uhuru collections" was about going global before his sad passing. 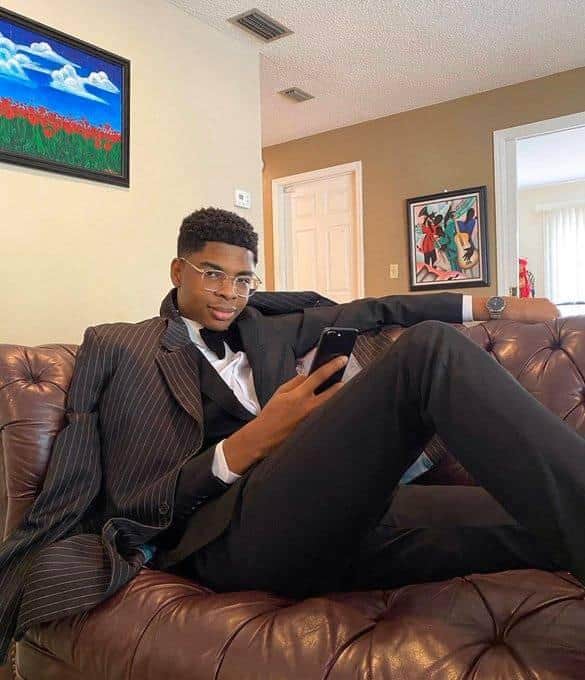 According to various testimonies given, it is believed that Izu never committed the crime labeled against him.

He got depressed after being accused of rape and was given no chance to speak while being abused for a crime he didn't commit. The trauma of the accusation led Izu to take his own life after making a post on Twitter 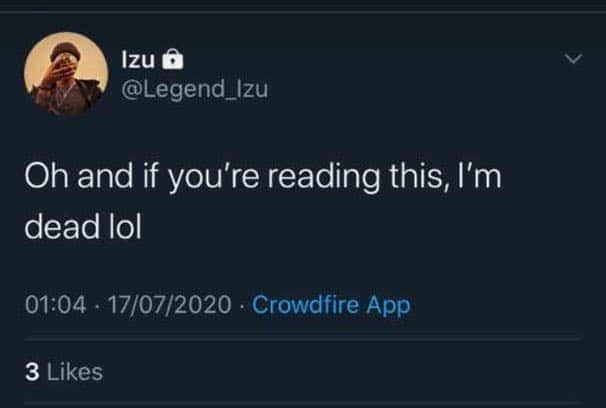 Immediately after his demise, his twitter page got locked and since then people have been condemning thee accuser for wrongfully accusing Izu. They left a series of comments, lamenting on the sad passing of Izu and how unverified support to the accuser while denying him a chance to speak have made the world lose a promising star The Accuser, whose Twitter is Nanichianese, made a post saying she doesn't regret what she did, even after it has been revealed that Izu was innocent of the allegations. People commented on the wrong way in which rape cases are handled. Mostly when a man is accused of rape, nobody takes their time to find out if he actually committed the crime before jumping into conclusion, that was the case in Izu's accusation and the reason behind his death. At the moment, the Izu's friends are calling out for justice for Izu's death and the arrest of Nanichianese and her bandwagon of friends who falsely accused Izu of a Crime he did not Commit, which led him to take his life. 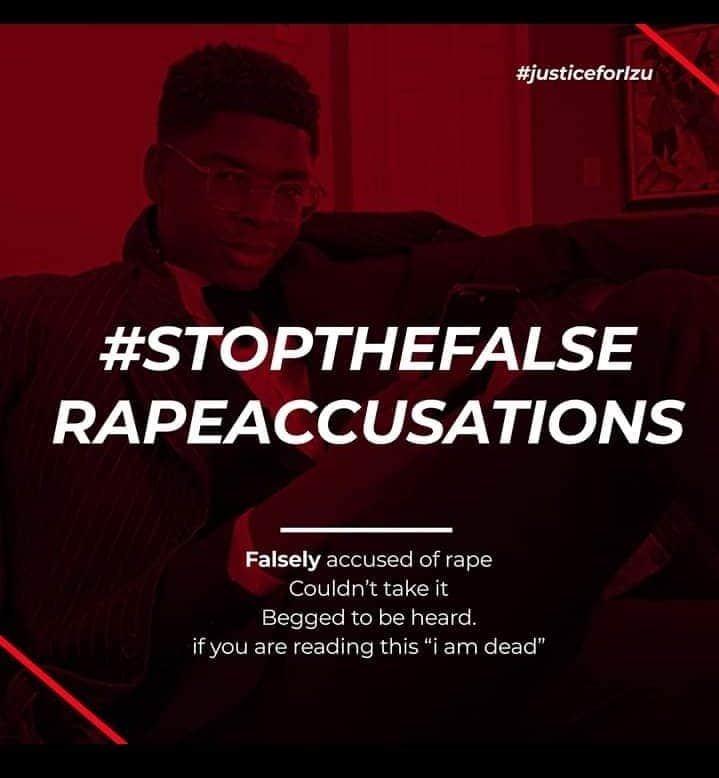 Rape is not a minor issue that should be taken lightly. People should learn to investigate properly in such cases before accusing or concluding that someone perpetuated the act.

Secondly, although women and any rape victim are asked to out if they experience such so that their offenders can face judgment, they should also know that Accusing someone of rape is as traumatic as being raped.

Please let us all be cautious about how we act, think, and treat others. What we may do thinking that it means nothing may affect another person's life so badly that the idea of committing suicide may come to them.

We should also know that everyone's mental, emotional, psychological and endurance strength are not on the same wavelength.

SAY NO TO RAPE!

SAY NO TO FALSE RAPE ACCUSATION!!

NEVER EVER ACCUSE SOMEONE OF A CRIME THEY DID NOT COMMIT!!!