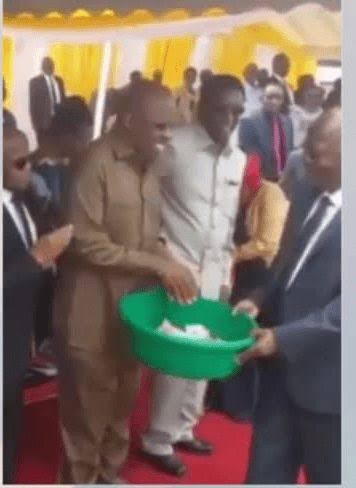 The Abakaliki Division of the Ebonyi State Magistrate Court has sentenced one Nwonu Emmanuel to prison for breaking into church and stealing Church offering.

The suspect was said to have broken into a Catholic Church on Thursday, in the city and made away with offering money.

It was gathered that he also robbed a woman of her phone and some money.

The Police arrested him on Monday and the sum of N41,465.00, was recovered from him.

Emmanuel however confessed to committing the crime. He said that he broke into the St. Patrick Catholic Church in the Capital City, broke the offering box and stole the sum of N41,465.

He was therefore arraigned before the Magistrate’s court on two counts of burglary and stealing, on Thursday 16th July.

Emmanuel blamed his action on him been poor, saying that life had been hard on him since he lost his job, as a driver.

He said that he is suffering and taking care of himself and his blind father, and it has not been easy for him.

According to him,he doesn't have a place of his own to stay. He sleeps under Spera-In-Deo flyover every night.

The Police Prosecutor, Sergeant Alumona Sabastine, tendered the stolen money, the damaged padlock and the stolen mobile phone, as evidence against the suspect, before the court.

The court, presided over by Chief A.C. Nwusulor, said that the offenses would have earned the suspect about seven years imprisonment, but sentenced the accused to 12 months imprisonment without an option of fine.

The Magistrate said the court decided to limit it to 12 months, so that the accused could have a rethink and turn a new life.