Eze Chima: A Tale Of The Benin Kingdom And The Supposed Origin Of The Niger-Delta And Onitsha.

According to history, it is unusual for a chief of the ancient Benin kingdom to have a male child and not give him a native name. Therefore, it is very clear that from the onset, there is no way Eze Chima would be of Benin ancestry, but a full blooded Igbo Chief with a history of Benin migration. 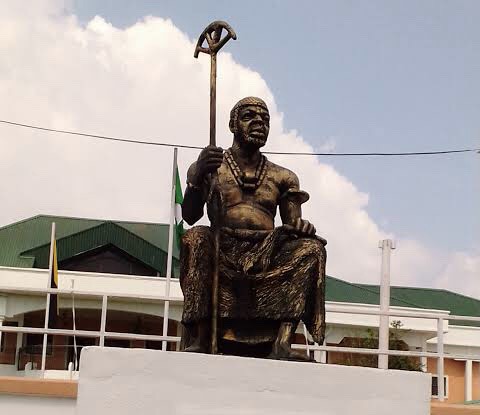 Eze Chima of Igbo decent, was a powerful spiritualist who left the ancient Benin kingdom to return to Igbo land as a result of a clash he had with the Oba of Benin and his brother Gbunlawa.

According to Michael Crowther’s story of Nigeria, Eze Chima was was from Aro in present day Abia State. He left Aro for Benin for the purpose of collecting slaves from the Benin kingdom and also to establish an agency of the Long Juju Shrine of Arochukwu.

It is worthy of note that in the days of old, whenever a spiritualist travels to a distant land, he reports his arrival to the local Chief or the spiritual head of his host community. In accordance with this belief, when Eze Chima arrived in Benin, he reported himself to the Oba of Benin who accepted him as his guest. With time, he settled in Benin and worked as a native doctor and an agent of the long juju shrine of Arochukwu.

The Oba of Benin was immensely impressed by the magical and spiritual powered of Eze Chima, and soon moved on to install him as a Chief in his palace. Thus, the plain blunt and ordinary native doctor, who left Arochukwu to establish an agency of the Juju shrine, earned a Chieftaincy title and became Chief Chima or Eze Chima.

Having planted his feet firmly in Benin, he sent for his brother Ekensu and other relatives from Arochukwu. With time, the influence of Eze Chima and his spiritual powers expanded down to the present day Niger Delta, among the Urhobos and Itsekiris. The greatest index of Eze Chima’s influence in the Benin culture is the fact that the people of Benin adopted the Igbo days of the week (Eke, Orie, Afor, Nkwor) as their own days of the week.

According to Wellington Igunbor, who from his maternal lineage, belonged to one of Benin’s traditional Chieftaincy families (Chief Gaius Obaseki’s family - Obaseki was the Iyase or Prime Minister of Benin in 1947). As Eze Chima’s influence grew in the Benin kingdom, so did the population of his settlement expand. He was so influential and absorbed into the Benin culture that there was hardly anything the Benin natives could do that Eze Chima and his people could not do.

The conflict between Eze Chima and the Oba of Benin ensued when the mother of the Oba of Benin (Asije), encroached into one of the lands that was allocated to Eze Chima and his people. Unfortunately, she was harassed out of the land, and in retaliation, the younger brother of the Oba of Benin (Gbunlawa), who was also the Benin Warlord, accompanied by his soldiers, stormed Eze Chima’s settlement and killed some of him men while a few others were injured. The harassment went on, and Eze Chima’s people were then forced to leave Benin and seek a new settlement in a place far from the reach of the Oba and his brother.

On their way out of Benin, some of Eze Chima’s people settled at Agbo, 44 miles away from Benin. Others went beyond this distance and settled in Isele-Uku, Onicha-Olona, Onicha-Ugbo and Obio. When they got to the west bank of the River Niger, another group took a canoe and paddled down the River to Abo and settled there. Led by Oreze, the eldest son of Eze Chima, the remaining group crossed the River Niger, to the eastern bank and settled among the Oze people - the original inhabitants of what is today, the big and commercial city of Onitsha.