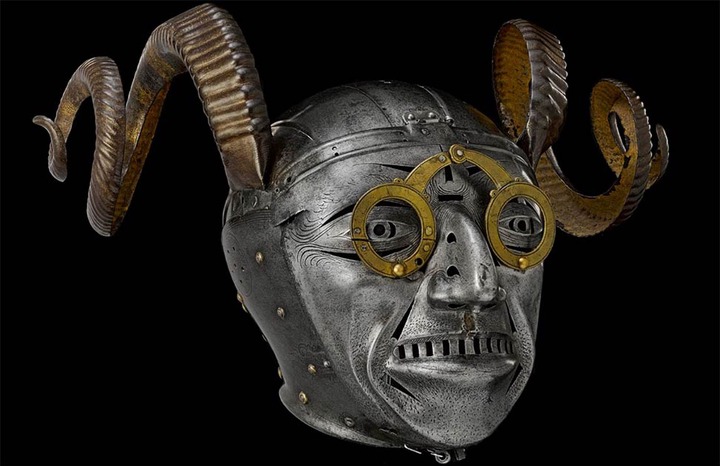 One of the most bizarre artefacts exhibited today in the Royal Armouries Museum in Leeds, England, the peculiar horned helmet of Henry VIII has attracted much scholarly attention. Nevertheless, the horned helmet is still surrounded by much uncertainty. As its name suggests, scholars believe that the helmet once belonged to the notorious Tudor king, Henry VIII , and that it was part of a set of armor sent as a gift by Maximilian I, the Holy Roman Emperor.

Grotesque and Life-like: Analyzing the Horned Helmet of Henry VIII

Although referred to as a helmet, it would be more accurate to call this headgear an armet, a helmet that protects the entire skull. The horned helmet is made of iron, and parts of it would have originally been attached with silver-gilt decorative panels. The most striking feature of the helmet, of course, is its pair of spiraling ram horns, modelled in sheet iron, and attached on either side of the object. Another eye-catching aspect of the helmet is its pair of brass spectacle frames. The spectacles are of the so-called rivet type, since the two halves of the object are joined by a rivet, and the bridge of the wearer’s nose is gripped by the spectacle frames. 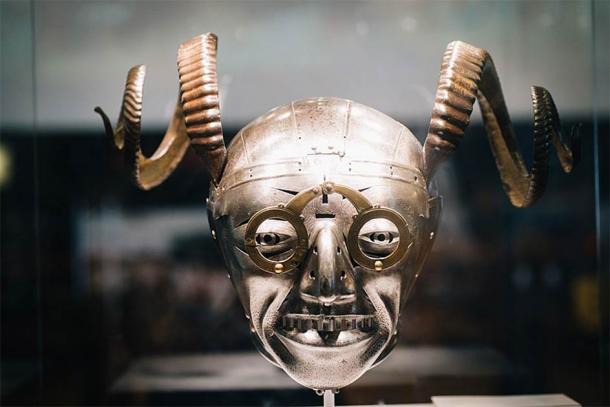 Although the horns and spectacle frames are the most noticeable parts of the helmet, numerous other details can be observed when one looks at the object more closely. For instance, one may notice the stubble on the chin of the helmet, and the crow’s feet under the eyes. Thus, the horned helmet of Henry VIII can be described as being both grotesque and life-like at the same time.

According to general consensus, the horned helmet was created by Konrad Seusenhofer, a renowned European armorer of the era. Seusenhofer was in the service of the Holy Roman Emperor , Maximilian I, who commissioned a set of armor for the English king in 1511. Incidentally, Henry had ascended the throne of England just two years earlier and the armor would have been a diplomatic gift. In 1511 Maximilian joined the Holy League, formed by the Pope to expel the French from Italy. England also joined the Holy League, turning Maximilian and Henry into allies. It is therefore not entirely surprising that Maximilian, a huge fan of armor, would send such a gift.

Maximilian became Holy Roman Emperor in 1508, but had not been crowned by the Pope in Rome as was the custom, due to his war with the Venetians. Maximilian belonged to the House of Habsburg and it was during his reign that the dynasty’s influence was greatly expanded. Through Maximilian’s marriage to Mary of Burgundy, for instance, the Habsburgs gained Burgundy, whilst Kufstein, Rattenberg, Kitzbühel, and a number of towns in Upper Austria were annexed after the emperor’s involvement in the war over the Bavarian succession. The expansion of the Habsburg realms, which Maximilian initiated, culminated during the reign of his grandson and successor, Charles V, who was the ruler not only of Germany, but also Austria, the Netherlands, southern Italy, Spain, as well as colonies in the New World.

Did the Horned Helmet Really Belong to Henry VIII?

A “head piece with a ram’s horn” is listed amongst Henry’s possessions after his death in 1547. It is commonly thought that this refers to the horned helmet residing today in the Royal Armouries Museum. Nevertheless, not everyone is convinced. For a long time, for instance, scholars believed that the helmet belonged to Henry’s court jester, Will Sommers. The helmet, after all, is meant to depict a fool. This is based on the presence of the spectacle frames. 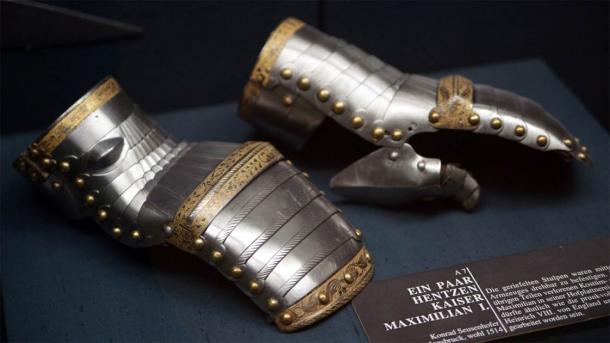 A number of images of Medieval jesters shows the figure carrying or wearing spectacles. This is seen, for instance, in the Schellenunter or “Knave of Bells”, a jester on a playing card designed by the 16th century artist Peter Flötner. As a matter of fact, it has been suggested that the horned helmet resembles Flötner’s jester. One possible explanation for Maximilian sending Henry a Seusenhofer helmet in the shape of a jester, could be a desire to convey a message of humility: Since the jester is a symbol of foolishness, it is a reminder that everyone, from kings to commoners, had some foolishness in them.

Whatever the reason, it seems highly unlikely that Henry would have used this helmet in battle, since it would literally make the king look like a fool. It is possible, however, that the king could have used the helmet, and its accompanying armor, for celebrations or parades. After Henry’s death, the helmet and the armor were probably displayed alongside the rest of the king’s possessions. After the English Civil War, the king’s armor is alleged to have been discarded as scrap metal. The oddity of the horned helmet, however, likely saved it from such a fate, and the object eventually found its way into the collection of the Royal Armouries Museum in Leeds. 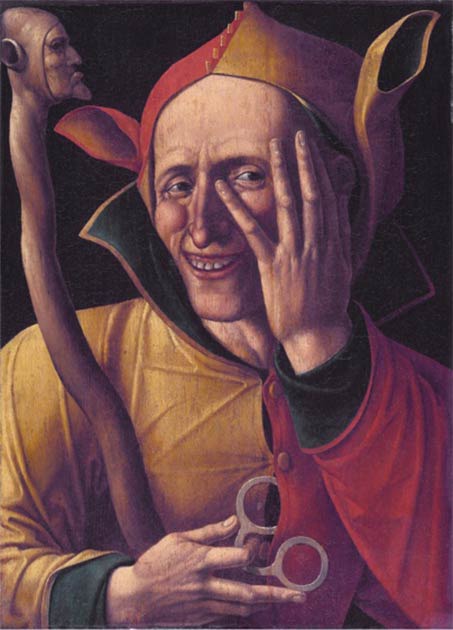 Henry VIII’s horned helmet still resides in the museum, more specifically, on its second floor in the center of the Tournament Gallery. This artefact continues to provoke fascination and was even chosen by the museum to serve as its logo. Questions remain regarding what it was supposed to represent and why it was given to the king. Whilst the quality of the helmet’s craftsmanship is certainly to be admired, it is the mystery surrounding the artifact itself that continues to exert a gravitational pull.