The ancient Nri kingdom is considered the origin of the Igbo people who occupy the South-Eastern part of Nigeria. Nri and Aguleri, which is the center of the Umueri-Igbo creation myth, are in the territory of the Umueri clan in Anambra State. 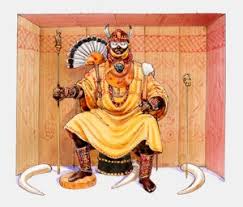 The people of Umueri traces their lineage back to the patriarchal king-figure, Eri. The origin of Eri is unclear. While some historical accounts said he was a direct descendant of Gad, the son of Jacob, others have disputed the account saying while claiming that Eri was a supernatural being that was sent by God from heaven. Whatever one is the truth, no one is certain.

The first Eze Nri (king of Nri), Ifikuanim, was a direct descendant of Eri, and according to the Nri tradition, seven years would pass after the demise of an Eze Nri before another Eze Nri would be crowned. The interregnum served as a period of divination as signs from the deceased Eze Nri would communicate the successor of his choice from the grave.

Allegiance and respect to the Eze Nri was obtained through a ritual oath by his subjects. By the 14th century, the influence of the Eze Nri extended beyond the Northern Igbo region into the west banks of the Niger communities.

Eze Nri’s hegemony of most of the Igbo land lasted from the time of the 4th Eze Nri to that of the 9th. After this era, a series of conflicts emerged and existed from the ninth to the fourteenth reign.

According to Onwuejeogwu (2003), in 1911, British troops forced the reigning Eze Nri to renounce his spiritual power of religion known as Ikenga, ending the kingdom of political power known as Nri.