Why were cats so symbolic to ancient Egyptians?

By Spokenwords (self media writer) | 10 months ago

The animal 'Cat' when talked about, brings a lot of notions, ideas and perspectives to one's mind. Some believe they are pets, others believe they are associated with evil,black magic, and lots of mystical things. But Cats were at some point very important to Egyptians in the past. Why was it so? The same animals Egyptians loved was hated by some other set of people. I have got the answer for you.

Cats and its affiliated family served a useful purpose in ancient Egyptian households and were eventually associated with deities.

Along with hieroglyphics, obelisks and geometric patterns, cats feature prominently in ancient Egyptian art, reflecting the animal’s unique status among the people who dwelled along the Nile River. The animals were initially adopted as useful predators in ancient Egypt and gradually became symbols of divinity and protection. 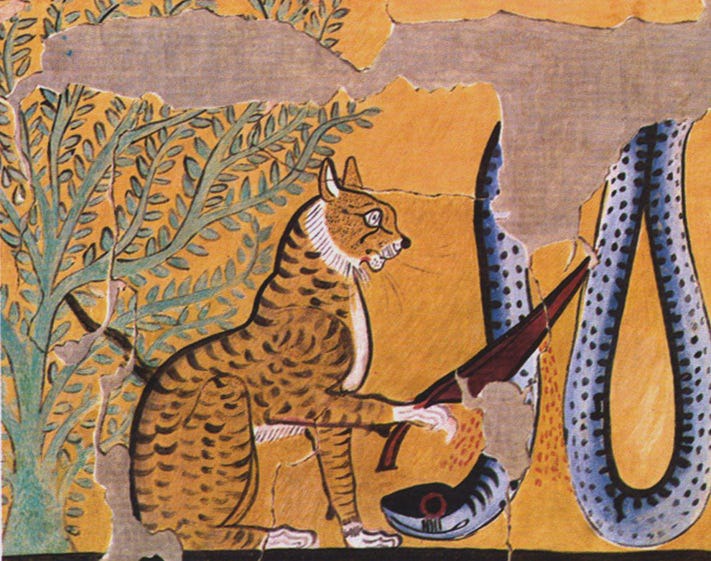 Whether or not they were worshiped as deities, cats were an integral part of ancient Egyptian life. And, based on mummified cats discovered in tombs alongside humans, they carried an important role in the afterlife, as well.

For most of the civilization’s history, ancient Egyptians saw cats as mutually beneficial companions.

Cats might come inside when it was hot, and they in turn would chase away dangerous animals, such as snakes many of which were venomous and scorpions

After keeping a cat as a live-in pet during their lives, ancient Egyptians continued that relationship into the afterlife. The tomb was one's posthumous house for eternity. In your tombs you would depict your family, your greatest titles and awards and the things you enjoyed doing. So, to see cats included in these tableaus speaks to their importance both in the daily lives of ancient Egyptians and in their hope that they continued with them into the Hereafter.

In the Tomb of Nebamun, now housed at the British Museum, one painting features a cat accompanying Nebamun while he is out fishing and fowling. The cat has caught a bird in its mouth and grasps two other birds in its claws. One of the eyes of the cat is embellished with gold leaf gilding, which, according to the British Museum, is “the only known example of gilding on wall paintings in tomb chapels.”

The presence of cats in tombs wasn’t limited to paintings—sometimes cats were mummified and placed inside their human companion’s tomb, according to the Carnegie Museum of Natural History. One reason this was done is that when cats were mummified, they could then be used as funerary goods. This meant that the deceased person could inhabit the body of the mummified cat in the afterlife.

As is the case across various civilizations and cultures, ancient Egyptians saw royals as trendsetters, taking cues from the ruling tastemakers on everything from food, to fashion, to felines.

Ancient Egyptians held cats in such high regard because of the practices and preferences of their gods, but also because their kings, the pharaohs, kept giant cats.

Members of the Egyptian royal class dressed their cats in gold and let them eat from their plates. Although members of the lower classes weren’t in a position to dress their cats in precious metals, she notes that they did make and wear their own jewelry featuring feline designs.

And while cats were a favorite of the pharaohs, some of their characteristics were more important during some dynastic eras than others. 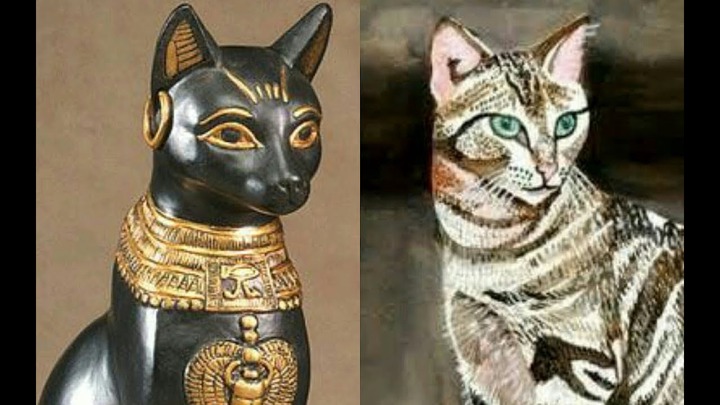 In addition to appreciating their ability to keep rodents, snakes and other pests out of their homes, the ancient Egyptians understood that cats of all sizes are smart, quick and powerful.

Cats in ancient Egypt were also seen as possessing another type of power: fertility. They are often depicted sitting under women's chairs, implying a connection to women, and perhaps fertility more broadly. Noting that the association may stem from the fact that cats have multiple kittens in a litter.