By Sirax (self meida writer) | 1 months 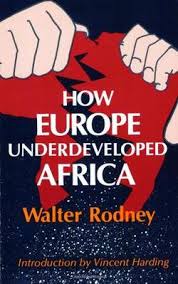 The concept of whether Europe was the sole proprietor in underdeveloping Africa is still on ground as many scholars still argue or to this day. When Europe began the colonization of Africa, historians believe they came to do nothing but exploit. Walter Rodney asserted that Europeans are the cause of Africa's underdevelopment. The capitalists of Europe argue that they exploited Africa to some extent but they were responsible for bringing development and education to Nigeria, while this may be a little bit true, yes the Europeans brought education, civilization and others, but this still does not justify the fact that they looted an enormous uncountable and imessurable amount of wealth from Africa especially through the natural resources.

One of the way which the exploited Africa was the continuous exploitation of the labour of Africa, it is believed that the blacks alone contributed over $300 billion to the American economy during slavery and forced labour. When the Europeans came, tehy saw how blessed Africa was, they saw the natural resources that flowed through the land but there was something they noticed, they found out that the Africans didn't even know the use of those resources so they exploited it from them. This were resources that if kept would have been of immense use in the future but it was all looted.

Able bodied men in Oyo empire, Benin empire, Arochukwu Confederacy and other parts of African society were all taken into slavery and this brought weakness to the African society.

Europeans believe that our works from Africa never benefited them, they believe that they never defrauded or exploited Africa. Africa on the other hand believe that the Europeans took advantage of them in the precolonial and slavery times. What do you think about this, let us know by commenting below.

7 signs of a jealous friend