The History of the Famous Warri crisis.

On July 12 1999,  reports alleges that the conflict in the Delta states continues and now involves the Urhobos, the Ijaws, the Isekiris and lately the Aniomas. The conflict between the Isekiri and Ijaws reportedly flared up again in June 1999, and a lot of people lost their lifes to the violence.

Post express states that, the Warri carnage is not only symptomatic of the numerous problems facing the people of the Niger Delta region, but also an exposé of an unwillingness by the government over the years to address problems which possess potent capability to affect the stability of the nation …the crisis had a more enduring motive than the relocation of the Headquarters from Ogbe-Ijoh (Ijaw land) to Ogidigben (Itsekiri land) ", and "centres around resource-sharing" (ibid.).

The district of Warri in Delta State, has been the scene of ethnic and territorial conflicts between the Itsekeri and the Ijaws since March 1997, when ethnic violence broke out between the Ijaws and the Itsekeris following a government decision to relocate the headquarters of the Warri south local government council from an Ijaw community to a community belonging to the Itsekeris. With a population of approximately five million people, the Ijaw are reportedly Nigeria's fourth largest ethnic group. However, they are scattered in six states, which makes them minorities in these states (ibid.). The relocation of the municipality to Warri allegedly angered the Ijaws who interpreted this as "further evidence of their marginalization" (ibid.). Reports claimed that more than 80 people died in the clashes and the army was ordered to intervene (23 Apr. 1997). The conflict allegedly strained the relations between the "three ethnic groups: the Ijaw, Urhobo and Itsekiri, that make aboriginal claims to [Warri]. Nigerian troops were deployed to Warri "after five people including a policeman, were shot dead and several others wounded in continuing inter-ethnic fighting".

At a peace meeting between youths and leaders of the Ijaw and the Itsekiri at Effon near Warri, the warring parties agreed to end the hostilities (west Africa 19-25 May 1997, 783). "Colonel David Dungs, and the general officer commanding the 82nd Division of the Nigerian Army, Major-General Felix Mojapero, presided over the deliberations that produced assurances from both warring parties that the safety of all persons and companies operating in Warri would be guaranteed…Major-General Mojapero later warned that the leaders will be held responsible for any fresh outbreaks of violence in the area" (ibid.). Men of the Nigeria Police Force who come from Ijaw or Itsekiri were removed from the area "to ensure safety of the officers and check any partisanship in the ethnic crisis. Although after the peace meetings there were still clashes between the different ethnic group, even up to date. One Nigerian rapper who spoke about the Warri crises of 1998 was Erigga, he elaborated to some extend the violence caused by the conflict and disagreement between the groups. 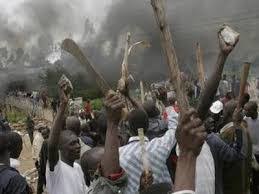