By gistnodeyfinish (self media writer) | 5 months ago

On your journey to Oyo, right below Fiditi, there is a little town named "Ilu Aje." Which basically translates to "Witch Town." Ilu Aje is a rather significant rural hamlet with huge fields located between the cities of Ilora and Jobele in Oyo State's Afijio Local Government Area. “Ilu Aje” literally means “a town of fortune in sales or business transactions.”

However, history bestowed upon it the strange homophonic appellation of “Ilu Aje” (Town of Witches) as a result of the intervention of Akinyolu, a herbalist (Ifa diviner) from the town, who cast a divination for a late Alaafin over a missing Prince of his. 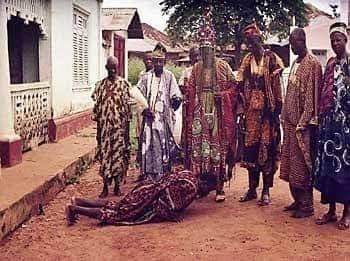 In the late 1980s, there was a sign board in Fiditi pointing to the path to the village, with the inscription:

“WELCOME TO ILU AJE, THE HOME OF SCIENCE!”

However, this is not the case...

WHERE DID THE NAME COME FROM?

The king's son has gone missing!

Is it true that an Alaafin son has gone missing? In actuality, Alaafin of Oyo during the Oyo-Ile era (ancient Oyo empire) was an Emperor, not a king! No, a god!

Even today, Alaafin of Oyo's power is second only to that of the Ooni of Ife.

Death the father, death the mother, second only to the gods in charge!

When such an entity's son goes missing, the entire empire falls into disarray! Hunters were dispatched to find the son. Every nook and cranny of Oyo town was combed. Despite searching every nook and visiting every hilltop, Alaafin's son could not be found.

The father was heartbroken over his lost son, just like the shepherd in Jesus Christ's biblical account who had 99 sheep but was depressed about the lone missing sheep.

Herbalists from Oyo to Ife were contacted. Magicians were summoned from Ado ekiti to Sepeteri, from Egbado to Ilaje, but no one could assist in the search for the missing kid.

Kabiyesi was depressed, Olori was in pain, the Oyomesi were dissatisfied, the King's household was in disarray, and the entire empire was depressed.

Then, about midday on one market day, an old tattered herbalist named Akinyolu arrived in the market square, seeking for directions to the Alaafin's palace.

Because of his dusty and wrinkled appearance, the market women looked at him with scorn. He was taken to the palace after much ado.

Protocol prevented him from seeing the King, Iku Baba Yeye. The guards at the Palace enquired as to why he was there to visit the King. He claimed that the subject was strictly for the Alaafin's ears. He was turned back until one of the guards suggested that they seek an audience with the King and obtain his permission.

While the king and chiefs were arguing in the open court, Akinyolu entered the palace court with his apo ifa (oracle bag), and everyone stared at him with suspicion.

Can't you see we're in the midst of a serious problem?” The chiefs approached him and asked him a question.

“I am a babalawo from a remote and secluded section of town, and I have come to assist you with your missing son.”

The region of "Ilu Aje" had no name at the time.

The chiefs chuckled and said, "Kikiki."

High-profile onieguns have attempted and failed; who do you think you are? Please leave!”

Kabiyesi was just staring at him, uninterested. To avoid treating Akinyolu rudely, Kabiyesi told him to go ahead, but he should make it snappy.

Akinyolu performed his divinations and informed the king as follows:

“Kabiyesi, you don't need to worry. Get 5 chiefs to sit beneath the (Igi Emi) shea butter tree at the town's eastern border in 7 days, when the sun is directly above the head and man stands on his own shadow.

They should be clad in white and should clap their hands rhythmically in unison. On the 21st clap, the king's son would have arrived and asked for water. It was obvious that Akinyolu was nuts! In their minds, the chiefs came to a conclusion.

However, one will go to any length to find a missing son. So, even though the babalawo's advice was insane, the Alaafin nevertheless followed it. The king's son appeared to them on the 21st clap.

When the son was brought before the king and the events were recounted, the Alaafin was claimed to have inquired: People speculated that he lived near a woodland spot on the outskirts of Oyo.

The King directed that Akinyolu be dressed in finery and treated as the distinguished visitor that he was. Later, the monarch assured Akinyolu that if he asked for anything, anything at all, he would be happy to provide.

Akinyolu stated, "Kabiyesi, all I ask at my advancing age is that I return to my forest in peace, and you may choose among your slaves to accompany me back to the forest to live our own life there."

The King obliged, bestowing presents on Akinyolu and directing that he be given roughly 30 slaves to accompany him on his trek back to the jungle.

Akinyolu was appointed as the Baale of his ancient woodland, which is now a bustling town. Because the townspeople referred to him as "Aje," his realm was titled "Ilu Aje," which translates as "The Witch Town."

Over time, people just began shortening it to "Ilu Aje" omitting the "adifa." That was the origin of the town's name, and Akinyolu governed as the first Alaje of Ilu-Aje.