Hector of Troy: The Battle for Peace and the Wrath of Achilles 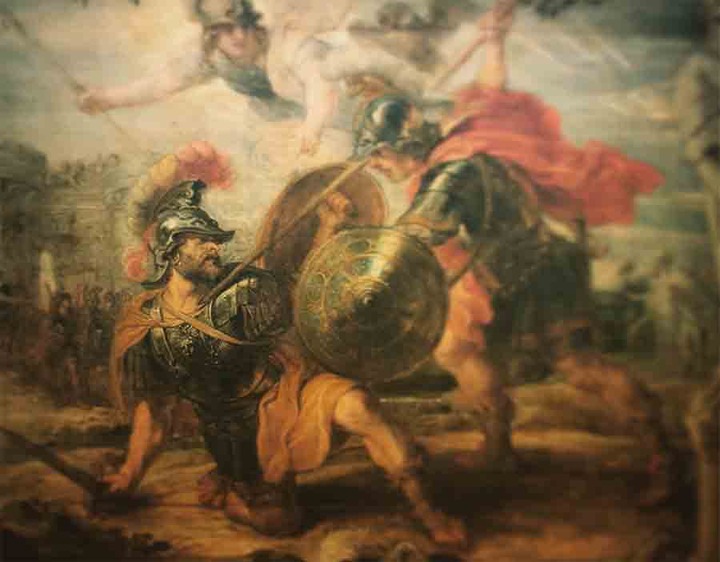 Homer’s epic Illiad tells the mythical story of the legendary 10-year Trojan War between the Trojans and the Greeks, which erupted after the beautiful Helen, wife of King Menelaus, was taken by Paris, son of King Priam of Troy. In classical mythology, Hector was a heroic super-warrior, who tried to protect his city from the havoc caused by his brother’s actions, all the while dealing with the meddlesome gods who took sides and intervened at will.

Most of what we know about the peace-loving Trojan hero comes from Homer’s epic poem in which Hector defends Troy as its greatest warrior. The Iliad also portrays Hector as the ideal warrior, not only in terms of his fighting prowess, but also in his moral character. In spite if all this, Hector meets a tragic end, as he is used by Zeus to bring the Greek hero Achilles back into battle.

The Peace-Loving Warrior: Hector and His Battle for Troy

Hector was the oldest son of Priam, the King of Troy, and his wife Hecuba. According to some later accounts, Hector’s true father was actually the god Apollo. This is because in the Iliad, Hector is depicted as a favorite of this god, who provides him with divine aid on numerous occasions. As the eldest son of Priam, Hector was heir apparent to the throne of Troy. The hero was married to Andromache, and the couple had an infant son, Astyanax, known also as Scamandrius.

Although Hector was Troy’s greatest warrior, he did not approve of the war with the Greeks in the first place. Indeed, Hector was a man of peace. Nevertheless, Hector took up arms when his homeland came under siege. According to Gaius Julius Hyginus, a Latin writer who lived between the 1 st century BC and 1 st century AD, Hector is reputed to have killed the first Greek warrior in the Trojan War, the first Greek casualty being Protesilaus. Although this warrior was Hector’s first victim, he was certainly not his last. Troy’s greatest warrior went on to slay many of his Greek enemies as the war dragged on. 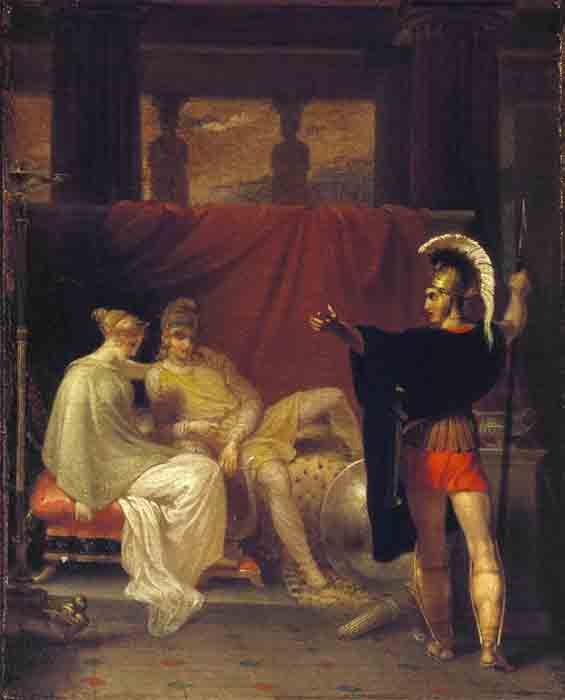 Legend has it that when Protesilaus’ wife, Laodamia, heard of her husband’s death, she was overcome by grief and prayed to the gods to allow her to speak to her husband. The gods took pity on Laodamia, and granted her request. Laodamia spoke to her husband for three hours, after which his shade was led by Hermes back to the underworld.

Still, Hector genuinely desired peace, and this is evident, for instance, in Book 3 of the Iliad. Here, Hector is shown mocking his brother, Paris, for his cowardice. Paris had challenged the Greeks heroes to mortal combat, but fled back to the Trojan lines as soon as Menelaus appeared. Hector’s taunting had its desired effect, and Paris agreed to face Menelaus in a duel. The winner of the duel would gain Helen and all her treasures. More importantly, the duel would end the war:

“The rest will seal in blood their binding pacts of friendship.

Our people will live in peace on the rich soil of Troy,

our enemies sail home to the stallion-land of Argos.” 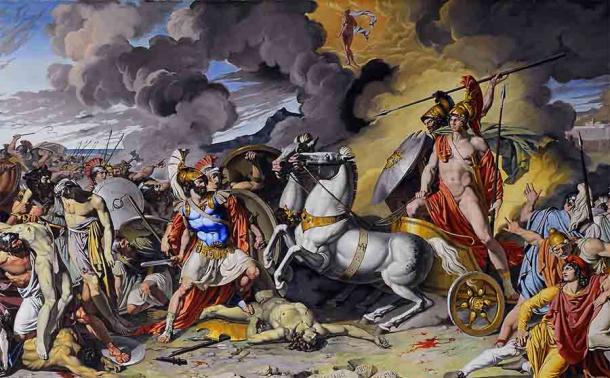 When Hector heard this, he was immensely pleased, as peace would soon be achieved, whatever the outcome of the duel. Therefore, Hector approached the Greeks to announce Paris’ challenge. He did so whilst risking his own life, as the Greeks began firing arrows at him when they saw him walking towards them.

Agamemnon realized that Hector was coming with a message, and therefore commanded his men to stop firing at the Trojan hero. The duel was fought, and Paris was easily defeated. Through Aphrodite’s intervention, however, Paris was rescued, and brought back to the city of Troy. It was also through divine intervention that the truce was broken, and the war between the Greeks and Trojans continued. Thus, the hope for peace was dashed.

Incurring the Wrath of Achilles: The Death of Patroclus

Indeed, it was Hector’s fate to perish at the hands of Achilles, and once more the gods had their part to play in the events that unfurled. At the beginning of the Iliad, we learn that Achilles, the greatest Greek warrior, decided to withdraw his support for the war effort, following a dispute with Agamemnon. Without Achilles, the Greeks were eventually forced back to their ships by Hector and the Trojans. Still, Achilles would not budge. Even the delegation, led by Odysseus, was unable to bring the hero back to the field of battle. 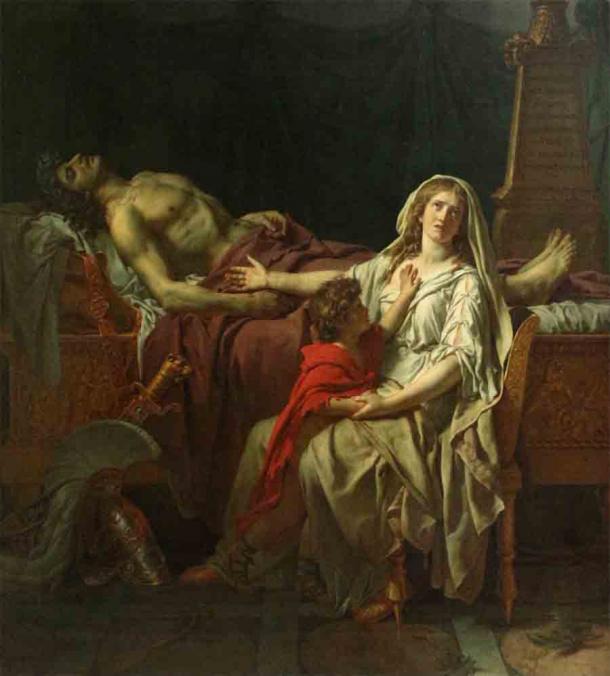 Although the desperate situation of the Greeks had no bearing on Achilles, it affected his companion, Patroclus, who pleaded with the great hero. Achilles was moved by his companion, and permitted him to lead the Myrmidons into battle. Therefore, Patroclus put on Achilles’ armor, and led the Greeks against the Trojans. Patroclus, disguised as Achilles, succeeded in forcing the Trojans away from the Greek ships, and in the process, killed many of the enemy’s warriors.

Prior to the battle, Achilles had commanded Patroclus to withdraw once he had pushed the Trojan back from the ships. In his frenzy however, Patroclus did not obey Achilles’ command and continued his assault on the Trojans. It was due to this that Patroclus ultimately lost his life. Although he reached the walls of Troy, the city was defended by Apollo who stood on its ramparts. Patroclus charged the walls three times and was hurled back by the god each time.

On the fourth assault, Apollo shouted at Patroclus to back down and the warrior finally gave ground. In the meantime, Hector was debating whether to drive back the rout, or to rally his men within the ramparts. Apollo, taking the form of Asius, one of Hector’s uncles, persuaded the prince to go on the offensive. Therefore, the Trojans renewed their attack and Hector went for Patroclus.

Once they were out on the battlefield, Patroclus was struck by Apollo leaving him stunned. Then he was harmed by Euphorbus’ spear. When he encountered Hector, the Trojan warrior dealt him the final blow. As he was dying, Patroclus prophesized Hector’s death:

“you too, you won’t live long yourself, I swear.

Already I see them looming up beside you – death

and the strong force of fate, to bring you down

at the hands of Aeacus’ great royal son…

Hector vs. Achiles: A Tragic End for the Trojan Hero

Once Achilles learned of Patroclus’ death, he was filled with grief, and prepared to return to the war. Since Hector had stripped his armor from Patroclus’ corpse, and was now using it himself, Hephaestus forged Achilles another set of armor on request of Thetis, the hero’s mother. Although the armor is a magnificent piece of work, Hephaestus is well-aware that it would not save Achilles’ life, as the hero would himself lose his life shortly after defeating Hector.

In any case, Achilles and Hector finally meet on the battlefield. When Hector first caught sight of Achilles, he lost his nerve, and for a moment he contemplated surrendering to the hero. As the Greek hero drew closer, however, Hector began to flee, and was chased by Achilles around the city walls. After running three times around Troy’s walls, Hector finally found his courage and faced Achilles. Athena too was there, disguised as Deiphobus, Hector’s brother, though she was there to delude Hector and to aid Achilles. 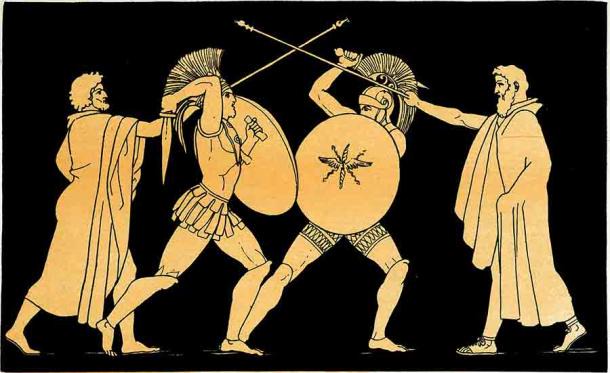 Although Hector tried to negotiate terms with Achilles, as he had done with Ajax, but the Greek warrior refused. After the duel began Hector was eventually killed outside the gates of Troy. Before his death, however, Hector prophesied Achilles’ impending death:

“But now beware, or my curse will draw god’s wrath

upon your head, that day when Paris and lord Apollo –

for all your fighting heart— destroy you at the Scaean Gates!”

Despite Hector’s pleas that his body be treated with respect, after slaying Hector Achilles lets loose his wrath on the dead Trojan hero. First he slit the hero’s heels, passed Ajax’s girdle through them, attached the cadaver to his chariot, and returned to the Greek camp where the corpse was dragged around Patroclus’ tomb three times. Despite all the mistreatment over twelve days, Hector’s corpse was kept intact by Apollo and Aphrodite, after which Priam visited the Greek camp and succeeded in retrieving his son’s body from the Greek hero. The Iliad ends with Hector’s lavish funeral.