By FrankChukwu (self media writer) | 8 months ago

Today in Yoruba land, there are two major statues of Moremi Ajasoro. Not that two statues are too small for a woman of her status, but rather, the two statues have different stories of the same woman. 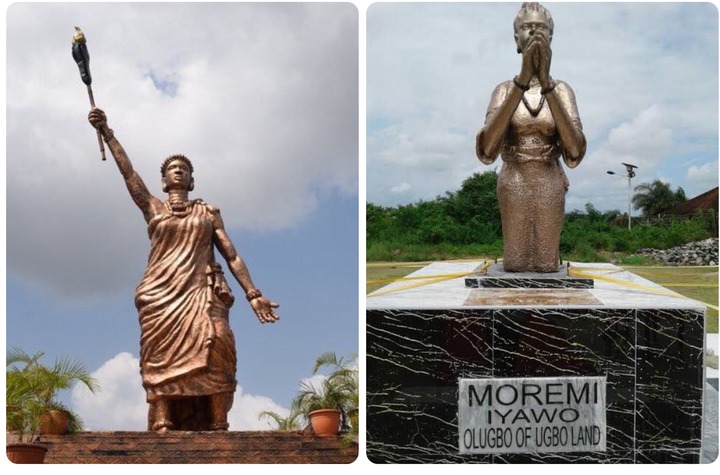 The former portrays her as a heroine holding the touch with which she helped Ile-Ife defeat the Ugbo, while the second portrays her pleading (to the forefathers of Olugbo to accept her back after she knew “the truth”).

The Ooni of Ife erected the tallest statue in Moremi’s honor, and she is venerated in Ife till today as a hero so that one would think she is a goddess. However, Ugbo people do not see her as such, they see her as a traitor and do not hide their hatred for her.

Olugbo when he unveiled the statue said that Moremi would always remain Olugbo’s wife who she bore a prince for and that Moremi eventually came back to beg Olugbo for forgiveness as depicted in the statue.

This article will expose us to the true plight and story of Moremi Ajasoro. First of all, she was said to be a princess (which is true), and there was a great famine in Offa which made two chiefs (Otun and Osi) to fight over a tuber of yam. The case was then taken to all Oloffa who wanted to cheat on both of them. It was subsequently taken to Alaafin Oranmiayam who then saw Moremi and took her as his wife despite his father's disapproval.

If Oranmiyam did so, then he committed incest, and no matter how primitive people try to portray it, it’s an abomination in Yoruba culture, and if he had done it, then history would have told us so.

The story went on that after becoming a queen in Oyo, Oranmiyan went to battles with other men and left Moremi and other queens behind. She was said to have gone back to Ile-Ife, probably because Ile-Ife was her husband’s home.

However, there are a few obstructions in the history of Moremi as no one can lay a finger on the particular of her existence, and also, no one can say the name of the Ooni and Olugbo on the throne when she lived. Some said Ooni Alayemoore.