Amun: The Ancient Egyptian god That Pharaoh's Magician Boasted About Against Moses and His God

Amun: The Ancient Egyptian god That Pharaoh's Magician Boaster Anout Against Moses and His God 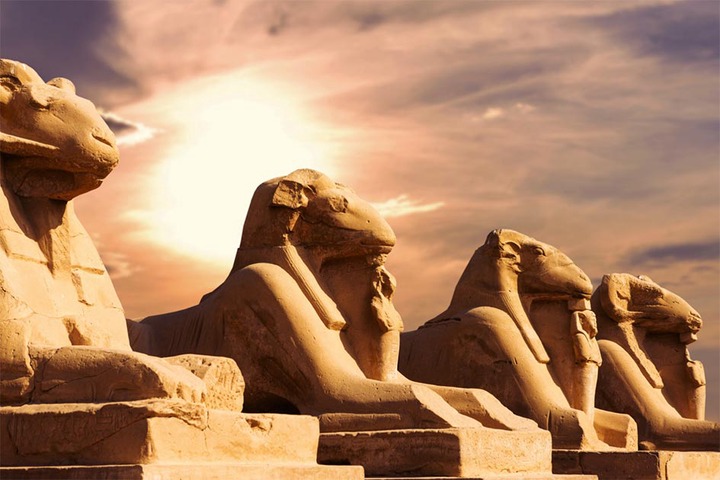 The Bible mentions a certain story, one that depicts some sort of a face-off between the God of the Egyltian and that of Moses and generally, that of the Hebrews. This story is one that many find Interesting, I myself have drawn so many interesting subjects and conclusions from the ideologies and presented in this story. The story can be found in the book of Exodus where Moses spoke of his God and his ability to free the people of Israel. However, Pharaoh began to brag in the ability of his magicians to counter whatever effect the God of the Isrealites could cause. However, what many do not know is that the story of the Egyptian magician and their supposed powers is never complete without their god Amun. An average Egyptian magician in Ancient Egypt is part of a secret order of can't dedicated to worshipping the god, Amun.

From what I gather in the story, Amun did demonstrate some sort of powers it just seems as though he was nothing compared to the gods of the Isarelites.

Nonetheless, What should one know about Amun?

The world of the ancient Egyptians was diverse and enigmatic, filled with untold wonders and beliefs that were closely interwoven with the nature around them. Of particular interest is the vast Egyptian pantheon: hundreds upon hundreds of diverse gods and goddesses, protective spirits, and guardian animals, all formed an enormous web of deities.

But as with all pantheons, there are those gods that stand above the others - creator gods, bringers of life, and kings above all others. And one such god was Amun. He was king of the gods, the creator of life, and he was always one of the major deities of ancient Egypt. Apart from the Heliopolis Ogdoad – he sat at the very top of the pantheon. Today we are bringing to life the details of Amun, as we try to understand the Egyptians’ belief and reverence of this mighty bringer of life.

The Earliest Forms of Amun

In the vastness that is the Egyptian pantheon, which has well over 1,500 deities, Amun stands out as one of the most important and powerful gods. In ancient Egyptian belief, Amun was originally a part of the Ogdoad - a group of eight primordial deities. Amun emerged from the primordial watery abyss, the so-called Nu, or Nun, and from it created the world, and is as such a creator god .

The depictions of Amun were almost always universally the same - in his original form. He is presented as a tall man, with a pointed, pharaonic beard and wearing two tall plumes on his head. In his hands he holds the was scepter and the ankh. The was scepter was used to display dominion and power, while the ankh symbolizes life.

The name of Amun was in ancient Egyptian written as jmn, and it was transliterated in many forms, usually as Ammon, Amoon, Amun or Hammon. This name is translated into ‘invisible’, or ‘the hidden one’, emphasizing Amun’s mysterious and enigmatic nature. This also connects to his facet of being the invisible god of air and wind, or his role as the one who emerged from the primordial waters, as he was later depicted with blue skin to symbolize this.

Just like many gods of the Ogdoad, Amun had a consort. This was his wife, Amaunet, a primordial goddess. In the ancient Egyptian belief, it is a likelihood that Amaunet was not a deity of its own, but rather a different face of Amun himself, a dualistic complement to his role in the pantheon. Even so, some important pyramid texts mention Amun and Amaunet together, for example the pyramid text 446BC, which states:

“O Amun and Amunet! You pair of the gods, who joined the gods with their shadow!”

During the long history of Egypt, his cult grew and evolved, and thus we can see Amun depicted in several distinct forms beside his usual human one. One of these is the goose. This earns Amun the epithet of the “Great Shrieker”, and connects him with the primordial goose, the one which laid the ‘world egg’, and whose shriek was the first sound. Another form was Kematef (He Who Has Completed His Moment), a serpent with the head of a ram, or Kamutef (The Bull of His Mother), a lion with a ram’s head. 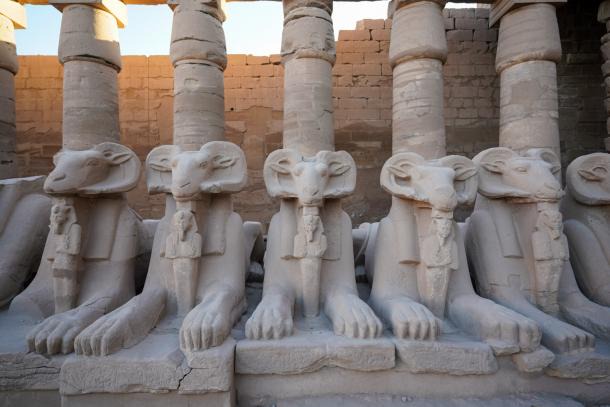 Another well attested form of Amun was that of a criosphinx, a sphinx with the head of a ram. This connected him with fertility. At other times he was portrayed as a lion, an ape, a human with a frog’s head and so on.

Historically, Amun was not always worshiped prominently around Egypt. His cult grew in importance with the ongoing political developments. One of the earliest events that made Amun even more popular, happened around the time of the 11 th Dynasty (roughly 2130-1990 BC). The dynasty which hailed from Thebes (known as Waset to ancient Egyptians) brought to prominence their favored deities, and the chief of these was Amun.

A good insight into this is the historical names of some pharaohs and rulers, who often incorporated the name of Amun into their own, for example the founder of the 12 th Dynasty (1991-1802 BC), called Amenemhe (“God Amun is First ”).

Later on, when the Theban royal 17 th Dynasty at last drove the Hyksos conquerors out of Egypt, their victory was dedicated to Amun the supreme god, and again his popularity rose.

There were several key monumental temples erected in glory of Amun, at various places and stages of Egyptian history. These included the three most important temples. One was the famous temple at Karnak. This magnificent complex is considered as the largest temple complex ever built by humans. And the central piece of this complex is the Great Temple of Amun. The procession way of Amun’s temple is lined with numerous criosphinxes.

Another temple was the one in today’s Deir el-Medina . Located on the western banks of the Nile, across Thebes, and very close to the famous Valley of the Kings. It was built by Ramesses II. And the third important temple is the Luxor Temple, originally built around 1400 BC and lays in the very heart of ancient Thebes. Here, Amun had another facet, being named Amenemope - or Amun of Opet.